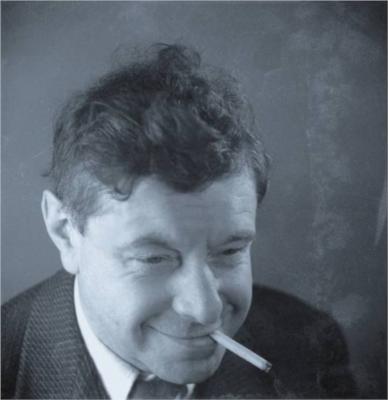 Lajos Tihanyi (29 October 1885 – 11 June 1938) was a Hungarian painter and lithographer who achieved international renown working outside his country, primarily in Paris, France. After emigrating in 1919, he never returned to Hungary, even on a visit.

Born in Budapest, as a young man, Tihanyi was part of the "Neoimpressionists" or "Neos", and later the influential avant-garde group of painters called The Eight (A Nyolcak), founded in 1909 in Hungary. They were experimenting with styles of Post-Impressionism and rejected the naturalism of the Nagybánya artists' colony. Their work is considered highly influential in establishing modernism in Hungary to 1918, when the First World War and revolution overtook the country.

After the fall of the Hungarian Democratic Republic in 1919, Tihanyi left and lived briefly in Vienna. He moved on to Berlin for a few years, where he connected with many Hungarian émigré writers and artists, such as Gyorgy Bölöni and the future Brassaï. By 1924 Tihanyi and numerous other artists moved to Paris, where he stayed for the remainder of his life.

In Paris, Tihanyi gradually shifted to more abstract styles in his work. His paintings and lithographs are held by the Hungarian National Gallery, Musée d'Art Moderne de la Ville de Paris, and the Brooklyn Museum of Art in New York City, among other institutions, and by private collectors. With the centenary of The Eight's first exhibition, Tihanyi has been featured in five exhibitions since 2004, including ones held in 2010 and 2012 in Hungary and Austria, and another in 2012 devoted to a solo retrospective of his work.

Lajos Tihanyi was born in Budapest in 1885 to a Hungarian-Jewish family in 1885. He had a younger sister Berta. Due to meningitis, Tihanyi became deaf and mute at the age of eleven, which narrowly restricted his schooling. He studied drawing at the School of Industrial Art and Design, as Hungary did not then have a fine art academy, but he is considered largely self-taught as an artist.

Tihanyi was largely self-taught and started working in Budapest. As a young man, he studied in the summer of 1906 at the Nagybánya artists' colony, in present-day Baia Mare, Romania, and was associated with them for some time. He aligned with younger painters, who were ready to absorb new directions, including the brilliant use of color by Fauvists. He went in a different direction from the aesthetic of naturalism of many in the colony.

He helped introduce the Post-Impressionist concepts and techniques of Cubism and Expressionism to art circles in Hungary. As one of a group called the "Neos," he adopted techniques other than the naturalism espoused by Simon Hollósy and others of the artists' colony. The older men had studied together in Munich in the late nineteenth century.

Tihanyi and others of the "Neos" developed into the Hungarian avant-garde. Károly Kernstok was considered a leader, and others were Béla Czóbel, Vilmos Perlrott-Csaba and Béla Iványi Grünwald, and Sándor Ziffer. Some had already been to Paris, where they were influenced by the work of French painters such as Paul Cézanne and Henri Matisse.