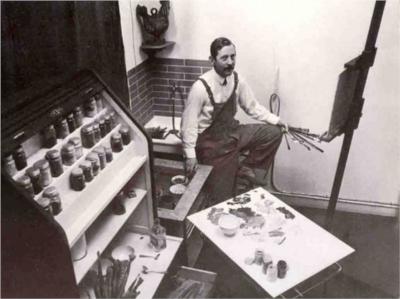 István Farkas (October 20, 1887 in Budapest; died on July 1944 in the concentration camp Auschwitz-Birkenau) was a Hungarian painter, publisher and victim of the Holocaust.

István Farkas's father Jozsef Wolfner (1856-1932), a prominent art collector, was the founder of the book publishing house Singer and Wolfner. István’s mother, Anna Goldberger, died when he was four years old. As an adult István changed his family name from Wolfner (the German word for wolf) to Farkas (the Hungarian word for wolf).

The painter László Mednyánszky was Farkas’ first art teacher in Budapest. After receiving an education from the painters of the art colony Nagybánya he moved to Paris in 1912, entered the painter's circle of the Cubists of the Académie de La Palette and became friends with André Salmon who later wrote a monograph about him. In 1914 he joined the Austro-Hungarian army as a lieutenant. He was captured and held as a prisoner of war in Italy.

In 1923, he met Ida Kohner (1895-1944), daughter of Baron Adolf Kohner, the president of the Federation of Jewish Communities in Hungary in the studio of Adolf Fényes. After marrying in 1925, they had three children together. Farkas had his first solo exhibition of 117 pictures in the Ernst Museum in 1924. In November 1925 Farkas moved again to Paris, where he became part of the art scene at the Café de la Rotonde in the Montparnasse quarter. He became an established artist while in Paris, having many solo exhibitions, and one of the prominent Eastern European painters in the Ecole de Paris.

As the sole heir of his father’s company, Farkas was forced to take over the family publishing house in Budapest after József Wolfner’s death in 1932. Under Farkas’ management the formerly conservative publishing house began publishing more progressive and modernist works. Despite his additional commitment as chief executive of the Új Idök KftHe, he kept his studio in Paris and continued to paint there. In 1932 and 1936 he had two large exhibitions at the Ernst Museum.

In 1939, the Horthy regime increased the severity of existing anti-Semitic legislation which had been implemented in 1919. Farkas, a Jew, expected that he would receive the protected status of a decorated war veteran and officer and for a short time he did. In 1943, he was able to organize an exhibition in the Tamás gallery, the catalog of which contained a foreword by Ernő Kállai.

After 1943 the persecution of Jews by the Hungarian authorities increased dramatically. Many of his friends and colleagues, including his French co-editor François Gachot, with whom he published books about József Rippl-Rónai, Tivadar Kosztka Csontváry and Benì Ferenczy pleaded with him to leave Hungary immediately.

After the German occupation of Hungary in March 1944, the Nazis, in conjunction with the Hungarian authorities, started the active persecution of the Hungarian Jewish community, including the establishment of Jewish ghettos and the deportation of Jews to Auschwitz. The persecution began in the countryside and Farkas, living in Budapest, had a final opportunity to escape. Once again his friends, including the sculptor Pál Pátzay urged him to flee. But Farkas, still believing he would be protected from the Germans by the Hungarian authorities, remained.