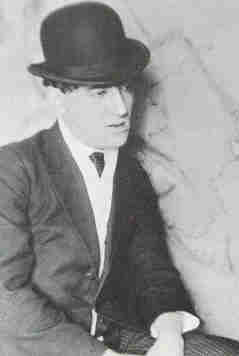 Julius Mordecai Pincas (March 31, 1885 – June 5, 1930), known as Pascin (pronounced [pas.kin]; erroneously French: [pas.kɛ̃] or [pa.sɛ̃]), Jules Pascin, or the "Prince of Montparnasse", was a Bulgarian artist known for his paintings and drawings. He later became an American citizen. His most frequent subject was women, depicted in casual poses, usually nude or partly dressed.

Pascin was educated in Vienna and Munich. He traveled for a time in the United States, spending most of his time in the South. He is best known as a Parisian painter, who associated with the artistic circles of Montparnasse, and was one of the emigres of the School of Paris. Having struggled with depression and alcoholism, he committed suicide at the age of 45.

Julius Mordecai Pincas was born in Vidin, Bulgaria, the eighth of eleven children, to the Sephardic Jewish family of a grain merchant named Marcus Pincas. Originally from Ruse, the Pincas family was one of the wealthiest in Vidin; they bought and exported corn, rice, maize and sunflower. His mother, Sofie (Sophie) Pincas, belonged to a Sephardic family, Russo, which had moved from Trieste to Zemun, where she and her husband lived before moving to Vidin and where their older children were born. The family spoke Judaeo-Spanish at home. In 1892, he moved with his parents to Bucharest, where his father opened a grain company, "Marcus Pincas & Co". Pascin worked briefly for his father’s firm at the age of fifteen, but also frequented a local brothel where he made his earliest drawings. His first artistic training was in Vienna in 1902 at age seventeen. In 1903 he relocated to Munich, where he studied at Moritz Heymann's academy. In 1905 he began contributing drawings to Simplicissimus, a satirical magazine published in Munich. Because his father objected to the family name being associated with these drawings, the 20-year-old artist adopted the pseudonym Pascin (an anagram of Pincas). He continued to contribute drawings to a Munich daily until 1929.

In December 1905, Pascin moved to Paris becoming part of the great migration of artists to that city at the start of the 20th century. In 1907 he met Hermine Lionette Cartan David, also a painter, and they became lovers. In that same year he had his first solo exhibition at Paul Cassirer Gallery in Berlin. Despite his social life, Pascin created thousands of watercolors and sketches, plus drawings and caricatures that he sold to various newspapers and magazines. He exhibited his works in commercial galleries and in the Salon d’Automne, the Salon des Indépendants, and the exhibitions of the Berlin Secession and at the Sonderbund-Aussstellung in Cologne. Between 1905 and 1914 he exhibited drawings, watercolors, and prints, but rarely paintings. It was not until about 1907–1909 that he produced his first paintings, which were portraits and nudes in a style influenced by Fauvism and Cézanne. He wanted to become a serious painter, but in time he became deeply depressed over his inability to achieve critical success with his efforts. Dissatisfied with his slow progress in the new medium, he studied the art of drawing at the Académie Colarossi, and painted copies after the masters in the Louvre. He exhibited in the United States for the first time in 1913, when twelve of his works were shown at the Armory Show in New York.