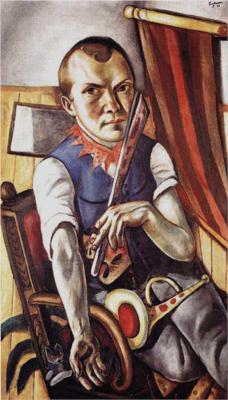 Max Beckmann (February 12, 1884 – December 27, 1950) was a German painter, draftsman, printmaker, sculptor, and writer. Although he is classified as an Expressionist artist, he rejected both the term and the movement. In the 1920s, he was associated with the New Objectivity (Neue Sachlichkeit), an outgrowth of Expressionism that opposed its introverted emotionalism.

Max Beckmann was born into a middle-class family in Leipzig, Saxony. From his youth he pitted himself against the old masters. His traumatic experiences of World War I, in which he volunteered as a medical orderly, coincided with a dramatic transformation of his style from academically correct depictions to a distortion of both figure and space, reflecting his altered vision of himself and humanity.

He is known for the self-portraits painted throughout his life, their number and intensity rivaled only by those of Rembrandt and Picasso. Well-read in philosophy and literature, Beckmann also contemplated mysticism and theosophy in search of the "Self". As a true painter-thinker, he strove to find the hidden spiritual dimension in his subjects (Beckmann's 1948 Letters to a Woman Painter provides a statement of his approach to art).

Beckmann enjoyed great success and official honors during the Weimar Republic. In 1925 he was selected to teach a master class at the Städelschule Academy of Fine Art in Frankfurt. Some of his most famous students included Theo Garve, Leo Maillet and Marie-Louise von Motesiczky. In 1927 he received the Honorary Empire Prize for German Art and the Gold Medal of the City of Düsseldorf; the National Gallery in Berlin acquired his painting The Bark and, in 1928, purchased his Self-Portrait in Tuxedo. By the early 1930s, a series of major exhibitions, including large retrospectives at the Städtische Kunsthalle Mannheim (1928) and in Basle and Zurich (1930), together with numerous publications, showed the high esteem in which Beckmann was held.

His fortunes changed with the rise to power of Adolf Hitler, whose dislike of Modern Art quickly led to its suppression by the state. In 1933, the Nazi government called Beckmann a "cultural Bolshevik" and dismissed him from his teaching position at the Art School in Frankfurt. In 1937 the government confiscated more than 500 of his works from German museums, putting several on display in the notorious Degenerate Art exhibition in Munich. The day after Hitler's radio speech about degenerate art in 1937, Beckmann left Germany with his second wife, Quappi, for The Netherlands.

For ten years, Beckmann lived in self-imposed exile in Amsterdam, failing in his desperate attempts to obtain a visa for the United States. In 1944 the Germans attempted to draft him into the army, although the sixty-year-old artist had suffered a heart attack. The works completed in his Amsterdam studio were even more powerful and intense than the ones of his master years in Frankfurt. They included several large triptychs, which stand as a summation of Beckmann's art.

After the war, Beckmann moved to the United States. During the last three years of his life, he taught at the art schools of Washington University in St. Louis (with the German-American painter and printmaker Werner Drewes) and the Brooklyn Museum. He came to St. Louis at the invitation of Perry T. Rathbone, who was director of the Saint Louis Art Museum. Rathbone arranged for Washington University in St. Louis to hire Beckmann as an art teacher, filling a vacancy left by Philip Guston, who had taken a leave. The first Beckmann retrospective in the United States took place in 1948 at the City Art Museum, Saint Louis. In St. Louis, Morton D. May became his patron and, already an avid amateur photographer and painter, a student of the artist. May later donated much of his large collection of Beckmann's works to the St. Louis Art Museum. Beckmann also helped him learn to appreciate Oceanian and African art. After stops in Denver and Chicago, he and Quappi took an apartment at 38 West 69th Street in Manhattan. In 1949 he obtained a professorship at the Art School of New York's Brooklyn Museum.