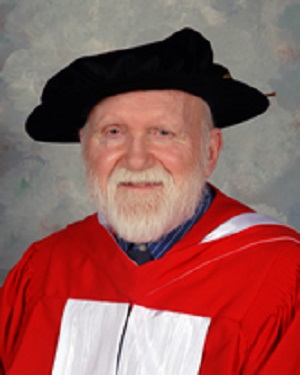 Ivan Kenneth Eyre, CM OM (born 15 April 1935 in Tullymet, Saskatchewan) is a Canadian artist best known for his prairie landscapes and compositionally abstract, figurative paintings. In addition, Eyre is a Professor Emeritus of painting and drawing at the University of Manitoba where he taught for 33 years, from 1959 until his retirement in 1992. He has been described as a "visual philosopher" and "a true outsider and visionary".


Ivan Eyre's paintings and drawings have been exhibited internationally and are featured in numerous galleries across Canada. His sculptures are prominently displayed at Assiniboine Park and the McMichael sculpture garden in Kleinburg, Ontario.


Ivan Eyre was born to Thomas and Katie Eyre in Tullymet, Saskatchewan in 1935. Eyre began school at the age of five, during which time his family relocated twice: first to Southey in 1940, then again to Ituna in 1941. Shortly thereafter, Katie and her three children left their rural environment and moved to urban Saskatoon while Thomas Eyre worked abroad as an Air Force electrician.


Eyre developed an artistic interest at an early age. At the age of 15, while still a high school student, he began taking after-school art lessons at the Saskatoon Technical Collegiate where he studied under Ernest Lindner for the duration of 1950-1953. According to Eyre: "Knowing that there was somebody seriously committed to art, somebody who had made it his life's work, was encouraging. [Lindner's] influence in this regard was important."


Eyre went on to attend evening classes at the University of Saskatchewan which were taught by Eli Bornstein in his final year of high school.


In 1953, Eyre moved to Winnipeg where he attended the University of Manitoba School of Art, graduating in 1957 with a BA in fine arts. In his autobiography, Eyre reminisces about the tutelage of his professors and class trips to the Chicago Art Institute. He was a pupil of artists Wynona Mulcaster and George Swinton. During his schooling as an undergraduate, Eyre exhibited several works at the Winnipeg Art Gallery, winning the attention and support of then gallery director, Dr. Ferdinand Eckhardt. Eyre received the Winnipeg Art Gallery Scholarship for his achievements in 1956. Around the time of his graduation, he married Brenda Yvonne Fenske, a peer student at the university.


Eyre continued on to the University of North Dakota, Grand Forks, in 1958-59 as a master's candidate where he both studied and taught as a graduate assistant. He completed several sculptural projects, among them his "first wooden head" which is currently stored in a private collection in Ottawa. The American art scene was in full swing and Eyre's paintings became open to influences from such artists like Willem de Kooning, Arshile Gorky, Joan Miro, and Max Beckmann.


Due to financial difficulties, Eyre and his wife returned to Winnipeg in 1959 where he was hired on a part-time basis by the University of Manitoba's School of Art. For one year, Eyre taught painting and drawing to students in Brandon and Neepawa as part of the university's extension course program. In 1960, Eyre became a full-time instructor, a position he would hold until his retirement in 1992.