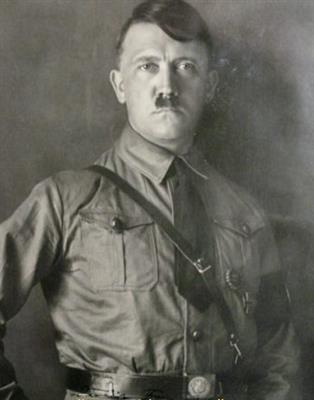 Adolf Hitler was an artist—a modern artist, at that—and Nazism was a movement shaped by his aesthetic sensibility. Cosmopolitan Vienna incubated his peculiar genius as well as his hideous ideas.

Hitler was eighteen years old when, in 1908, he moved from Linz and took up residence in Vienna. He walked the same streets as Freud, Gustav Mahler, and Egon Schiele, but he did so as one of the city's faceless, teeming poor. He often slept in a squalid homeless shelter, if not under a bridge. Intent on becoming an artist, he twice failed the art academy's admission test; his drawing skills were declared "unsatisfactory." A thin, sallow youth, he wasn't cut out for physical labor. With help from a friend, he earned a meager living drawing postcard views of Vienna and selling them to tourists. Jews were among his companions and patrons. Although he was fanatically pan-German—caught up in visions of an expanded Germany, which would incorporate Austria—he had laudatory things to say about Jews at the time. He proved, however, an apt pupil of the city's rampant strains of anti-Semitism, which exploited popular resentment of the wealthy Jewish bourgeoisie that had arisen under Franz Josef I, the conservative but clement—and, effectively, the last—Hapsburg emperor. Hitler studied the spellbinding oratorical style of the city's widely beloved populist, anti-Semitic mayor, Karl Lueger.

The young Hitler was wild for Wagnerian opera, stately architecture, and inventive graphic art and design. His taste in painting was—and remained—philistine. He swore by Eduard von Grützner, a genre painter of jolly, drunken Bavarian monks. Hitler's own stilted early efforts were the work of a provincial tyro who was ripe for instruction that he never received. As with any drifting young life, Hitler's might have gone in a number of ways. The most exasperating missed opportunity was the possibility of working under the graphic artist and stage designer Alfred Roller, a member of the anti-academic Secession movement whose sets for the Vienna Court Opera's productions of Wagner, which were conducted by Mahler, foreshadowed Nazi theatricality. With a letter of introduction to Roller, Hitler approached the great man's door three times without mustering the nerve to knock. As it turned out, he seems never to have consorted with anyone whose ego overmatched his own. Grandiose and rigidly puritanical, he was a figure of fun to many of his mates in Vienna's lower depths. He accumulated humiliations on the way to becoming a god of revenge for the humiliated of Germany. Meanwhile, his adopted city fired his imagination. In Mein Kampf, he recalled, "For hours, I could stand in front of the Opera, for hours I could gaze at the parliament; the whole Ring Boulevard seemed to me like an enchantment out of the 'Thousand and One Nights.' "

Secession artists would later enter the Nazi lists of degenerate art. Hitler despised them for their insults to classical ideals of human beauty and for what he called, in another context, "liberalistic concepts of the individual." But he embraced cleanly abstracted and geometric styles, which later informed his own design work (notably, the stunning Nazi flag) and his shrewd patronage of the gifted youngsters Leni Riefenstahl and Albert Speer. In lengthening retrospect, it becomes harder to credit categorical distinctions between Nazi aesthetics and those of redoubtable modern movements in architecture and design, including the Bauhaus. They share roots in avant-garde Vienna.

Hitler's rise remains mysterious— if only as to the precise amount of dumb luck involved—but it makes unnerving sense when viewed in terms of an eager artist's capacity to assimilate, synthesize, and apply the influences of his time and place. Nazism was a singular invention and Hitler was its indispensable author. Without him, Fascism might well have succeeded in Germany, but nothing foreordained Nazism's blend of dash and malice, its brilliant technology, and skulking atavism. It seems clear that Hitler employed artistic means—hypnotic oratory, moving spectacle, elegant design—not just to gain power but to wield it in the here and now. Meanwhile, he needed a political line—a cause, an enemy—that would be more dynamic than pan-Germanism. The fact that he came by the cult of Aryanism and anti-Semitism belatedly suggests that they developed as much in service to his artistic ambition as the other way around. All racism, on some level, is aesthetic, as a projection of "the ugly." Nazism, in a horrible way, was a program to remodel the world according to a certain taste.

Hitler was not a "failed artist." In fact, once he found his métier, in Munich after the First World War, he was masterly, first as an orator, and then as an all-around impresario of political theatre. He was also deluded. He had no vision of the future apart from ever grander opera. He met his end—which, as a deep-dyed Wagnerian, he might have anticipated but apparently did not—as a quivering wreck of the boy who had been so awed by imperial Vienna.

By Peter Schjeldahl for The New Yorker (cropped version)