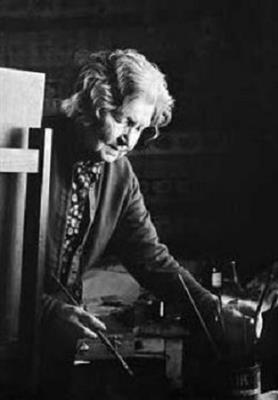 Maria Magdalena Laubser (/laʊbˈʃæ/; 14 April 1886 – 17 May 1973) was a South African painter and printmaker. She is generally considered, along with Irma Stern, to be responsible for the introduction of Expressionism to South Africa. Her work was initially met with derision by critics but has gained wide acceptance, and now she is regarded as an exemplary and quintessentially South African artist.


Maria Magdalena Laubser was born on the wheat farm Bloublommetjieskloof near Malmesbury in the Swartland, a productive agricultural area in South Africa. She was the eldest of six children of Gerhardus Petrus Christiaan Laubser and Johanna Catharina Laubser (née Holm). Laubser's youth was dominated by the rural and pastoral and she delighted in this carefree existence.


After attending the farm school Rocklands, she left for boarding school at Bloemhof Seminary, Stellenbosch, where she was introduced to the art of drawing. She returned to the farm in 1901, and during a visit to Cape Town she met Beatrice Hazel, a realistic romantic style painter, who introduced her to Edward Roworth, giving impetus to her desire to study painting.


In 1903 she convinced her parents to let her go to Cape Town once a week for singing lessons. The difficulty of travel and the low opinion her mother had of her mezzo-soprano voice discouraged her, but it was at this stage that she started painting on her own.


She studied painting under Roworth in Cape Town for two months of 1903, during which time she received a silver medal for her work. By 1907 she had become proficient enough to be elected to the South African Society of Artists (SASA) and, in 1909, she was represented at the annual exhibition of the SASA and the Fine Arts Association of Cape Town. By 1910, she had her own studio in Strand Street, Cape Town.


During a 1912 visit to her nephew, Gert Coetzee, in Pretoria, she took up employment as a governess on a farm owned by the Wolmarans family in Ermelo district, Transvaal, where she also taught art and needlework. While on vacation in Durban with a friend, Sophie Fisher, she befriended Jan Hendrik Arnold Balwé (Consul for the Netherlands in Durban 1903–1913), a shipping-line owner who offered to finance her and her sister Hannah's studies abroad.


Laubser and her sister left for Europe on 4 October 1913, initially living in an artists' colony at Laren, Noord-Holland in an area called het Gooi. She met Ita Mees, a concert pianist and Frederik van Eeden, author and poet. She also befriended Laura Knight and Frans Langeveld, both painters. In the last years of his life, Anton Mauve (1838 – 1888), who was an important influence on Vincent van Gogh, lived in Laren. Laubser worked in the studio he established there.


At the outbreak of World War I she went to London. She initially stayed in Huntingdonshire and then, in October 1914, moved to a London hotel and registered at the Slade School of Art for the period October 1914 to March 1919. Henry Tonks, Walter Westley Russell and Ambrose McEvoy taught her drawing, while Philip Wilson Steer lectured her in painting. It seems that she never painted during her time at the Slade, instead concentrating her efforts on drawing of portraiture and figure studies. Laubser returned to South Africa briefly in 1915 to visit the new family farm at Oortmanspost, near Klipheuwel in the Cape Province and again in March 1919, after her studies were concluded.