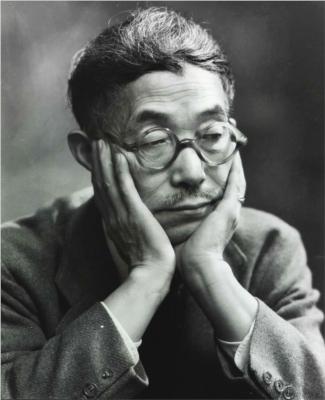 Kuniyoshi was born in Okayama, Japan in 1889. He immigrated to America in 1906, choosing not to attend military school in Japan. Kuniyoshi originally intended to study English and return to Japan to work as a translator. He spent some time in Seattle, before enrolling at the Los Angeles School of Art and Design. Kuniyoshi spent three years in Los Angeles, discovering his love for the arts. He then moved to New York City to pursue an art career. Kuniyoshi studied briefly at the National Academy and at the Independent School in New York City, and then studied under Kenneth Hayes Miller at the Art Students League of New York. He married his first wife Katherine Schmidt, who in 1919 lost her American citizenship due to her relationship with Kuniyoshi who was ineligible for American citizenship. He later taught at the Art Students League of New York in New York City and in Woodstock, New York. Nan Lurie was among his students, as was Irene Krugman. Around 1930, the artist built a home and studio on Ohayo Mountain Road in Woodstock. He was an active member of the artistic community there for the rest of his life. One of his pupils from the League, Anne Helioff, would go on to work with him at Woodstock.

Although viewed as an immigrant, Kuniyoshi was very patriotic and identified himself as an American. He never received his citizenship due to harsh immigration laws. During WWII, he proclaimed his loyalty and patriotism as a propaganda artist for the United States.

In 1935, Kuniyoshi was awarded the Guggenheim Fellowship. He was also an Honorary member of the National Institute of Arts and Letters and President of Artists Equity.

In 1948, Kuniyoshi became the first living artist chosen to have a retrospective at the Whitney Museum of American Art.

In 1952, Kuniyoshi also exhibited at the Venice Biennial.

In the early 1950's, Kuniyoshi became sick with cancer, and ended his career as an artist with a series of black-and-white drawings using sumi-e ink.

Kenneth Hayes Miller introduced Kuniyoshi to intaglio printmaking, and made approximately 45 prints between 1916 and 1918. In 1922, he learned about zinc plate lithography and adopted the technique.

Kuniyoshi was also known for his still-life paintings of common objects, and figurative subjects like female circus performers and nudes. Throughout Kuniyoshi’s career he had frequent changes in his art: methods and subject matter. In the 1920s, Kuniyoshi painted images that were more angular, somewhat Cubist style and a tilted plane that allowed him to paint the most detail for each object in his paintings. Kuniyoshi’s application of Cubism’s angularity can be seen in his painting titled Little Joe with Cow (1923). In these early paintings, Kuniyoshi was painting from a combination of his memory and imagination, which is a Japanese mode of thinking about painting. Instead of painting from life, like in Western painting, traditional Japanese painters typically paint the ideal image of a particular subject matter. Kuniyoshi combines this with Western painting in the way he applies the bold colors in oil on canvas; in Japan, traditional painters use ink on either silk or rice paper. These early paintings are the precursors to his mature style that we see in the 1930s.