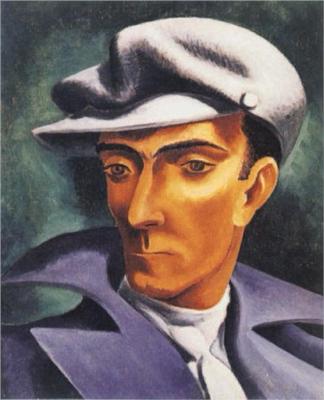 José Sobral de Almada-Negreiros was a Portuguese painter and writer, born in the then colony of São Tomé e Príncipe. Besides literature and painting, Almada composed ballet choreographies, and worked on tapestry, engraving, murals, caricature, mosaic, azulejo and stained glass. Having drawn inspiration from Cubism and Futurist movements, Almada-Negreiros is considered one of the pivotal figures of the Modernist movement in Portugal.
He started working as a humorist and drawer in 1911, joining the first and second Portuguese Humorist salons, in 1912 and 1913.
In 1913, Almada-Negreiros made his debut as an artist on the occasion of his first individual exhibition, at the Escola Internacional de Lisboa, featuring 90 drawings.
Following the lead of other European vanguard movements of the early 20th century, Almada-Negreiros, along with writers Fernando Pessoa, Mário de Sá-Carneiro and painters such as Amadeo de Souza-Cardoso and Santa Rita Pintor, formed a group named "Orpheu’s generation". Intent on agitating, subverting and scandalizing the Portuguese conservative bourgeoisie and, by extension, all social conventions, the group launched a magazine – "Orpheu" – a journal of art and literature. Essentially, their aim was to produce a shift in the society’s mind frame, urging people to look to the future and to believe in their Man’s capacities.
The magazine Orpheu had two editions, the first of which was published in 1915. The group’s ideals were strongly influenced by those of the futurist movement, particularly, by the Russian futurist manifesto “A slap in the face of public taste”, issued in 1913.
In the same year, Almada-Negreiros wrote the satirical text "Manifesto Anti-Dantas e por extensor" This was a humorous but fierce criticism towards Julio Dantas, an influential intellectual who stoutly defended the traditional aesthetic patterns of the time and strongly opposed “vanguardism”.
By this time, the French couple Robert and Sonia Delaunay, forced into exile by time the First World War was ravaging Europe, arrived in Portugal. The two artists, pioneers of the Orphism art movement, met Almada-Negreiros and the three established a lasting friendship.
Between the years of 1918-20 Almada-Negreiros lived in Paris, working as a dancer and as a factory worker to earn a living. Although he led a relatively isolated life, he established acquaintance with some of the most prominent artists of 20th century modern art.
The 20s were a prolific period in the life of Almada-Negreiros. He published literary works such as "Pierrot e Arlequim" (1924) and works on "Nome de Guerra" (“Name of War”); wrote articles and produced drawings for the covers of several magazines and newspapers; joined the "Exhibition of the Five Independents" (1923) and I e II "Autumn Salons" (1925 e 1926).
Between the years 1927 and 1932, Almada-Negreiros lived in Madrid, having had an active role in the artistic and literary scene of the city.
However revolutionary his ideals were, his stance during António de Oliveira Salazar's dictatorship was ambiguous. On the one hand, he supported contributed to promote the regime, having produced propaganda posters and public mural paintings. On the other hand, he was an assumed provocative critic of conservative and narrow-minded Portuguese society of his time.
In 1934, he married the painter Sarah Afonso and the couple had their only son, José Afonso de Almada Negreiros.
Almada-Negreiros died of heart failure in 15th June 1970.

His mother died in 1896. In 1900 he entered a Jesuit boarding school in Campolide, Lisbon. After the October 1910 republican revolution the school was closed and Almada entered the Escola Internacional, also in Lisbon.

In 1913 he had his first individual exhibition, showing 90 drawings. In 1915, along with Fernando Pessoa and Mário de Sá-Carneiro, he published poems and texts in the Orpheu artistic magazine, which would introduce modernist literature and art in Portugal. This same year Almada Negreiros wrote the famous Manifesto Anti-Dantas e por extenso, a humorous attack against a more traditionalist and bourgeois older generation. In 1915 the artist also conceived the O Sonho da Rosa ballet.

In 1917, with the aim of introducing the Portuguese public to Futuristic aesthetics, Almada Negreiros published, together with Santa-Rita Pintor, the Portugal Futurista magazine, writing the Ultimatum Futurista, às gerações portuguezas do século XX ("Futurist ultimatum to the Portuguese generations of the 20th century"). He promoted a conference, the Sessão Futurista ("Futurist Session"), where he appeared wearing a flight suit.

Between the years 1918–20 Almada lived in Paris. To support himself, he worked as a dancer and as a factory worker. In 1920 he returned to Lisbon. In 1925 he produced two paintings for one of the most famous cafés in Lisbon, A Brasileira. In 1927 he went to Madrid where he wrote for several Spanish publications, including Cronica and La Farsa. Around this same time he wrote El Uno, tragédia de la Unidad.

Back in Portugal, in the following years his artistic production were wide and prolific as he became a key artist in Portuguese modern art, influenced by Cubism and, mainly, by Futurism. His role during António de Oliveira Salazar's authoritarian regime was however ambiguous, acting both as an "aligned" artist (doing public mural paintings or propaganda posters) and a provocative critic of Portuguese society of the time.

In 1934 he married painter Sarah Afonso (May 13, 1899 – December 14, 1983). Re-settled for good in Portugal, he would continue in his role as "artistic agitator" within the oppressed society that was Portugal until the time of his death. In 1934 the couple had their only son, José Afonso de Almada Negreiros.

He was also, if only occasionally, an actor and a dancer, understanding that all forms of art are intimately linked.

Almada Negreiros always called himself a futurist artist, inspired by Filippo Tommaso Marinetti and other modern artists; however his style is wider, and does not fit easily into a category. Adding to this modern approach his works also revealed a decorative and arabesque richness, and sometimes a geometrical abstraction. His public art was often politically engaged, as his mural "Gare Maritima de Alcantara" shows. Many of his paintings and drawings show common people in daily affairs or attitudes usual in socialist art. His work as a visual artist extended to tapestry, printmaking, theater and ballet scenography.