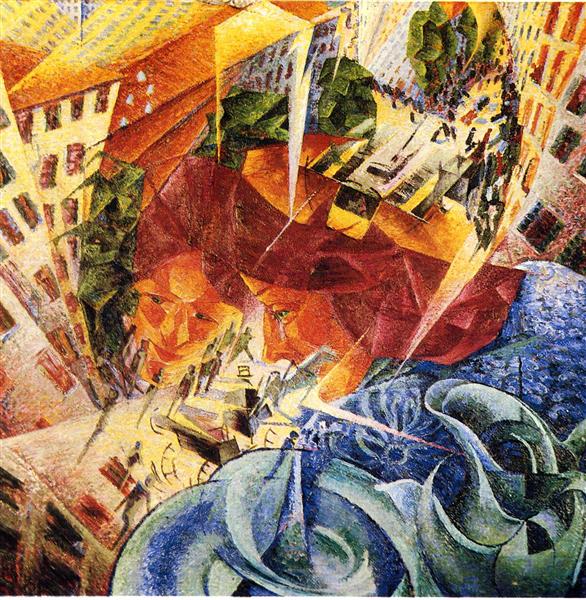 Futurism (Italian: Futurismo) was an artistic and social movement that originated in Italy in the early 20th century. It emphasized speed, technology, youth, and violence, and objects such as the car, the aeroplane, and the industrial city. Although it was largely an Italian phenomenon, there were parallel movements in Russia, England, Belgium and elsewhere. The Futurists practiced in every medium of art, including painting, sculpture, ceramics, graphic design, industrial design, interior design, urban design, theatre, film, fashion, textiles, literature, music, architecture, and even Futurist meals. Its key figures were the Italians Filippo Tommaso Marinetti, Umberto Boccioni, Carlo Carrà, Gino Severini, Giacomo Balla, Antonio Sant'Elia, Bruno Munari, Benedetta Cappa and Luigi Russolo, the Russians Natalia Goncharova, Velimir Khlebnikov, Igor Severyanin, David Burliuk, Aleksei Kruchenykh and Vladimir Mayakovsky, the Belgian Jules Schmalzigaug and the Portuguese Almada Negreiros. It glorified modernity and aimed to liberate Italy from the weight of its past. Cubism contributed to the formation of Italian Futurism's artistic style. Important Futurist works included Marinetti's Manifesto of Futurism, Boccioni's sculpture Unique Forms of Continuity in Space, and Balla's painting Abstract Speed + Sound (pictured). To some extent Futurism influenced the art movements Art Deco, Constructivism, Surrealism, Dada, and to a greater degree Precisionism, Rayonism, and Vorticism.

Futurism is an avant-garde movement founded in Milan in 1909 by the Italian poet Filippo Tommaso Marinetti. Marinetti launched the movement in his Futurist Manifesto, which he published for the first time on 5 February 1909 in La gazzetta dell'Emilia, an article then reproduced in the French daily newspaper Le Figaro on Saturday 20 February 1909. He was soon joined by the painters Umberto Boccioni, Carlo Carrà, Giacomo Balla, Gino Severini and the composer Luigi Russolo. Marinetti expressed a passionate loathing of everything old, especially political and artistic tradition. "We want no part of it, the past", he wrote, "we the young and strong Futurists!" The Futurists admired speed, technology, youth and violence, the car, the airplane and the industrial city, all that represented the technological triumph of humanity over nature, and they were passionate nationalists. They repudiated the cult of the past and all imitation, praised originality, "however daring, however violent", bore proudly "the smear of madness", dismissed art critics as useless, rebelled against harmony and good taste, swept away all the themes and subjects of all previous art, and gloried in science.

Publishing manifestos was a feature of Futurism, and the Futurists (usually led or prompted by Marinetti) wrote them on many topics, including painting, architecture, religion, clothing and cooking.

The founding manifesto did not contain a positive artistic programme, which the Futurists attempted to create in their subsequent Technical Manifesto of Futurist Painting (1914). This committed them to a "universal dynamism", which was to be directly represented in painting. Objects in reality were not separate from one another or from their surroundings: "The sixteen people around you in a rolling motor bus are in turn and at the same time one, ten four three; they are motionless and they change places. ... The motor bus rushes into the houses which it passes, and in their turn the houses throw themselves upon the motor bus and are blended with it."