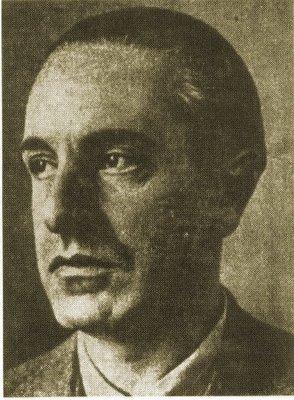 Baron Giulio Cesare Andrea Evola (Italian: [ˈɛːvola]; 19 May 1898 – 11 June 1974), better known as Julius Evola (/ɛˈvoʊlə/), was an Italian philosopher, painter, and esotericist. According to the scholar Franco Ferraresi, "Evola's thought can be considered one of the most radical and consistent anti-egalitarian, anti-liberal, anti-democratic, and anti-popular systems in the twentieth century. It is a singular (though not necessarily original) blend of several schools and traditions, including German idealism, Eastern doctrines, traditionalism, and the all-embracing Weltanschauung of the interwar conservative revolutionary movement with which Evola had a deep personal involvement".

Evola is popular in fringe circles, largely because of his extreme metaphysical ideas (including belief in ghosts and telepathy) and his extreme traditionalism, nationalism, and misogyny. Many of Evola's theories and writings were centered on his idiosyncratic mysticism, occultism, and esoteric religious studies, and this aspect of his work has influenced occultists and esotericists. Evola also advocated rape (among other forms of male domination of women) because he saw it "as a natural expression of male desire". This misogynistic outlook stemmed from his extreme right views on gender roles, which demanded absolute submission from women.

Historian Aaron Gillette described Evola as "one of the most influential fascist racists in Italian history". He admired SS head Heinrich Himmler, whom he once met. Evola spent World War II working for the Sicherheitsdienst. During his trial in 1951, Evola denied being a fascist and instead referred to himself as a "superfascist". Concerning this statement, historian Elisabetta Cassina Wolff wrote that "It is unclear whether this meant that Evola was placing himself above or beyond Fascism".

Giulio Cesare Andrea Evola was born in Rome to a minor aristocratic family of Sicilian origins. He was a baron. Little is known about his early upbringing except that he considered it irrelevant. Evola studied engineering in Rome, but did not complete his studies because he "did not want to be associated in any way with bourgeois academic recognition and titles such as doctor and engineer."

In his teenage years, Evola immersed himself in painting—which he considered one of his natural talents—and literature, including Oscar Wilde and Gabriele D'Annunzio. He was introduced to philosophers such as Friedrich Nietzsche and Otto Weininger. Other early philosophical influences included Carlo Michelstaedter and Max Stirner.

Evola served in World War I as an artillery officer on the Asiago plateau. He was attracted to the avant-garde and after the war, Evola briefly associated with Filippo Tommaso Marinetti's Futurist movement. He became a prominent representative of Dadaism in Italy through his painting, poetry, and collaboration on the briefly published journal, Revue Bleu. In 1922, after concluding that avant-garde art was becoming commercialized and stiffened by academic conventions, he reduced his focus on artistic expression such as painting and poetry.

In 1928, Evola wrote an attack on Christianity titled Pagan Imperialism, which proposed transforming fascism into a system consistent with ancient Roman values and the ancient mystery traditions. Evola proposed that fascism should be a vehicle for reinstating the caste system and aristocracy of antiquity. Although Evola invoked the term "fascism" in this text, his diatribe against the Catholic Church was criticized by both the fascist regime and the Vatican itself. A. James Gregor argued that the text was an attack on fascism as it stood at the time of writing, but noted that Benito Mussolini made use of it in order to threaten the Vatican with the possibility of an "anti-clerical fascism". On account of Evola's sentiment, the Vatican-backed right wing Catholic journal Revue Internationale de Sociétés Secretètes published an article in April 1928 entitled "Un Sataniste Italien: Julius Evola."