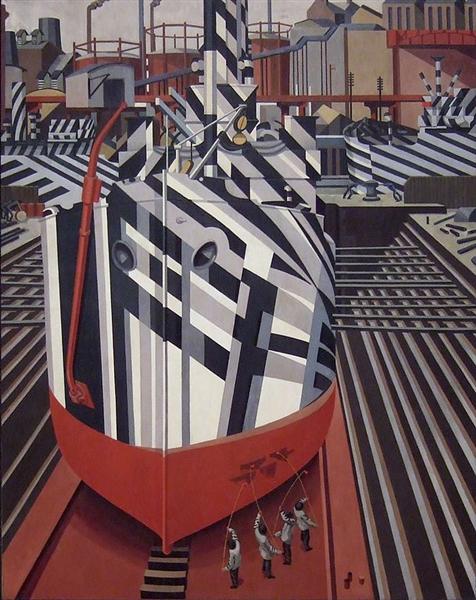 Vorticism was a short-lived modernist movement in British art and poetry of the early 20th century, partly inspired by Cubism. The movement was announced in 1914 in the first issue of BLAST, which contained its manifesto and the movement's rejection of landscape and nudes in favour of a geometric style tending towards abstraction. Ultimately, it was their witnessing of unfolding human disaster in World War I that "drained these artists of their Vorticist zeal". Vorticism was based in London but was international in make-up and ambition.

The Vorticism group began with the Rebel Art Centre which Wyndham Lewis and others established after disagreeing with Omega Workshops founder Roger Fry, and has roots in the Bloomsbury Group, Cubism and Futurism. Lewis himself saw Vorticism as an independent alternative to Cubism, Futurism and Expressionism.

Though the style grew out of Cubism, it is more closely related to Futurism in its embrace of dynamism, the machine age and all things modern (cf. Cubo-Futurism). However, Vorticism diverged from Futurism in the way it tried to capture movement in an image. In a Vorticist painting modern life is shown as an array of bold lines and harsh colours drawing the viewer's eye into the centre of the canvas.

The name Vorticism was given to the movement by Ezra Pound in 1913, although Lewis, usually seen as the central figure in the movement, had been producing paintings in the same style for a year or so previously.

The eleven signatories of the Vorticist manifesto were:

The Vorticists published two issues of the literary magazine BLAST, edited by Lewis, in June 1914 and July 1915. It contained work by Ezra Pound and T. S. Eliot as well as by the Vorticists themselves. Its typographical adventurousness was cited by El Lissitzky as one of the major forerunners of the revolution in graphic design in the 1920s and 1930s.

Experimental paintings and sculpture using angular simplification and abstraction, by Lewis, Wadsworth, Shakespear and others, were shown at the Rebel Art Centre in 1914, before the formation of the Vorticist Group. This work was contemporary with and comparable to abstraction by European artists such as Wassily Kandinsky, František Kupka and the Russian Rayist Group. The Vorticists held only one exhibition, in 1915, at the Doré Gallery in London. The main section of the exhibition included work by Jessica Dismorr, Frederick Etchells, Lewis, Gaudier-Brzeska, William Roberts, Helen Saunders and Edward Wadsworth. There was a smaller section area titled "Those Invited To Show" that included several other artists. Jacob Epstein was notably not represented, although did have his drawings reproduced in BLAST.

After this, the movement broke up, largely due to the onset of World War I and public apathy towards the work. Gaudier-Brzeska was killed in military service, while leading figures such as Epstein distanced themselves stylistically from Lewis. A brief attempt by Lewis to revive the movement in 1920 under the name Group X proved unsuccessful. Pound, however, through his correspondence with Lewis, was understood to hold a commitment to the goals of the movement as much as forty years after its demise.