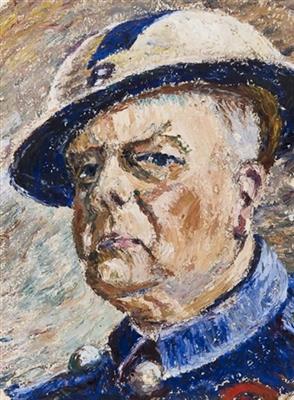 Self portrait as an ARP WWII warden - Cyril Power

Cyril Edward Power (17 December 1872 – 25 May 1951) was an English artist best known for his linocut prints, long-standing artistic partnership with artist Sybil Andrews and for co-founding The Grosvenor School Of Modern Art in London in 1925. He was also a successful architect and teacher.


Cyril Edward Power was born on 17 December 1872 in Redcliffe Street, Chelsea, the eldest child of Edward William Power who encouraged him to draw from an early age. This passion led to him studying architecture and working in his father's office before being awarded the Sloane Medallion by the Royal Institute of British Architects in 1900 for his design for an art school.


In August 1904 Power married Dorothy Mary Nunn in Bury St Edmunds, Suffolk, shortly afterward moving to Putney in London where they had a son, Edward Raymond Roper-Power, the following year (Power added his mother's maiden name to his own after his father left home though rarely used his full name). Power worked as an architect at the Ministry of Works under Sir Richard Allington and was involved with the design and construction of the General Post Office, King Edward VII Building and also the Post Office at the corner of Exhibition Road and Imperial College, Kensington, London.


This led to the publication of his three-volume work: A History of English Mediaeval Architecture by the Talbot Press in 1912 which featured 424 of his own ink and pen illustrations and detailed designs.


The outbreak of the First World War saw the birth of his daughter, Joan Margaret Roper-Power, and his commissioning into the Royal Flying Corps and management of the repair workshops at Lympne Aerodrome on the Kent coast. Power also designed and executed a War Memorial for the Great Western Railway at Paddington, London around this time.


After demobilisation the family moved to Bury St Edmunds where Power recommenced his architectural practice which included design alterations and additions to Chadacre Hall Agricultural College for Lord Iveagh and the beginning of his move into creating artwork.


During the early 1920s Power was producing watercolour landscapes and townscapes as well as the first of some 40 drypoints. In 1918, Power met Sybil Andrews, with whom he maintained a working relationship which lasted some 20 years. His youngest son Edmund was born in December 1921, in Bury St Edmunds. Shortly after their first joint exhibition in Bury St Edmunds, the family moved to St Albans, Hertfordshire.


Power and Andrews enrolled at Heatherley's School of Fine Art, London in 1922, when he was also elected a Fellow of the Royal Historical Society. Power also helped Iain McNab and Claude Flight set up The Grosvenor School of Modern Art in Warwick Square, London with Andrews becoming the School Secretary. Power was a principal lecturer, typically on the subjects of: The Form and Structure of Buildings, Historical Ornament and Symbolism and Outline of Architectural Styles and Frank Rutter, the art critic, on Modern Painters from Cézanne to Picasso. It was here at The Grosvenor School that Claude Flight taught the art of linocutting. His classes were attended by his colleagues, Power and Andrews, and students that came from as far afield as Australia and New Zealand, attracted by the advertisements in The Studio magazine.