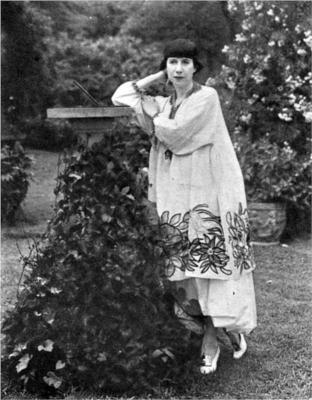 With her sisters, Carrie and Ettie, she hosted a salon for modernists in Manhattan, which included Marcel Duchamp, Henry McBride, Carl Van Vechten and Georgia O'Keeffe. She confined most exhibitions of her own work to these gatherings, occasionally submitting work to the Society of Independent Artists. Florine shared original poems at her salons, and a book of her work, Crystal Flowers, was published privately and posthumously by her sister Ettie Stettheimer in 1949. It was reissued to acclaim in 2010.

Florine was born in Rochester, New York to Rosetta Walter and Joseph Stettheimer, a family of wealthy German-Jewish ancestry. Her father, a banker, left the family before the children were grown. She was the fourth of five children: Walter, Stella, Carrie, Florine, and Ettie. After Walter and Stella married, the three youngest children were raised in a close relationship with their mother, who adopted an epicurean way of life. The three sisters were known as the "Stetties" and lived a life of leisure oriented on artistic pleasure and work. From 1906 to 1914, Florine lived abroad with her fellow "Stetties" and mother while continuing to enhance her education of the arts in Berlin, Stuttgart and Munich.

Stettheimer studied for three years 1892 to 1895 at the Art Students League of New York, but came into her own artistically upon her permanent return to New York after the start of World War I. From 1915 to 1935, she and her sisters Ettie and Carrie hosted a salon "for the contemporary literati, gay and polyglot New Yorkers and European expatriates".

Stettheimer preferred to restrict showing her work to a more private audience as opposed to exhibiting publicly. In October 1916, the only solo exhibition of her work during her lifetime took place at Knoedler & Company in Manhattan, curated by Marie Sterner. She exhibited twelve "high-keyed, decorative paintings", none of which were sold.

From then on, Stettheimer preferred to show her work "in non-competitive situations", as Barbara Bloemink writes. Thus year after year, over a period of two decades, Stettheimer entered her work at the Annual exhibitions of the Society of Independent Artists. She also continued to refine her style in rendering highly personal self-portraits, including a self-portrait in the nude, and group portraits that included her own family. Other works, such as her 1920 painting Asbury Park South, depict parties or gatherings held with her friends and family. She also prepared a number of well known portraits of Marcel Duchamp that explore androgyny and doubling. Cushioned by family resources, Stettheimer refrained from self-promotion and considered her painting "an entirely private pursuit". She intended to have her works destroyed after her death, a wish defied by her sister Ettie, her executor.

Stettheimer's privileged position pervades her work. As one critic has written,

Stettheimer created the sets and costumes for the 1934 production of Four Saints in Three Acts, an opera by Virgil Thomson that included a libretto by Gertrude Stein. Her designs, which used cellophane in innovative ways, proved to be the project for which she was best known during her lifetime.