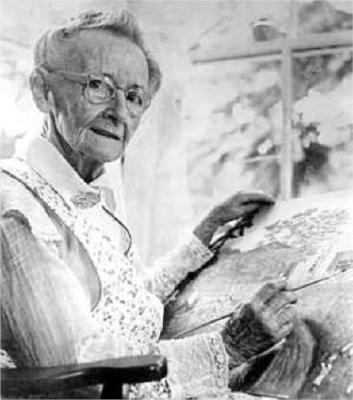 Anna Mary Robertson Moses (September 7, 1860 – December 13, 1961), known by her nickname Grandma Moses, was an American folk artist. She began painting in earnest at the age of 78 and is often cited as an example of an individual who successfully began a career in the arts at an advanced age. Her works have been shown and sold in the United States and abroad and have been marketed on greeting cards and other merchandise. Moses' paintings are displayed in the collections of many museums. The Sugaring Off was sold for US $1.2 million in 2006.

Moses appeared on magazine covers, television, and in a documentary of her life. She wrote an autobiography (My Life's History), won numerous awards, and was awarded two honorary doctoral degrees.

The New York Times said of her: "The simple realism, nostalgic atmosphere and luminous color with which Grandma Moses portrayed simple farm life and rural countryside won her a wide following. She was able to capture the excitement of winter's first snow, Thanksgiving preparations and the new, young green of oncoming spring... In person, Grandma Moses charmed wherever she went. A tiny, lively woman with mischievous gray eyes and a quick wit, she could be sharp-tongued with a sycophant and stern with an errant grandchild."

She was a live-in housekeeper for a total of 15 years, starting at 12 years of age. One of her employers noticed her appreciation for their prints made by Currier and Ives, and they supplied her with art materials to create drawings. Moses and her husband began their married life in Virginia, where they worked on farms. In 1905, they returned to the Northeastern United States and settled in Eagle Bridge, New York. The couple had ten children, five of whom survived infancy. She expressed an interest in art throughout her life, including embroidery of pictures with yarn, until arthritis made this pursuit too painful.

Anna Mary Robertson was born in Greenwich, New York on September 7, 1860; she was the third of ten children born to Margaret Shanahan Robertson and Russell King Robertson. She was raised with four sisters and five brothers. Her father ran a flax mill and was a farmer. As a child, Moses attended a one-room school for a short period of time. That school is now the Bennington Museum in Vermont, which has the largest collection of her works in the United States. She was inspired to paint by taking art lessons at school. Moses first painted as a child, using lemon and grape juice to make colors for her "landscapes". Other natural materials that she used to create works of art included ground ochre, grass, flour paste, slack lime and sawdust.

At 12 years of age, she left home and began to work for a wealthy neighboring family, performing chores on their farm. She continued to keep house, cook and sew for wealthy families for 15 years. One of the families that she worked for—the Whitesides—noticed her interest in their Currier and Ives prints and purchased chalk and wax crayons so that she could create her own artwork.