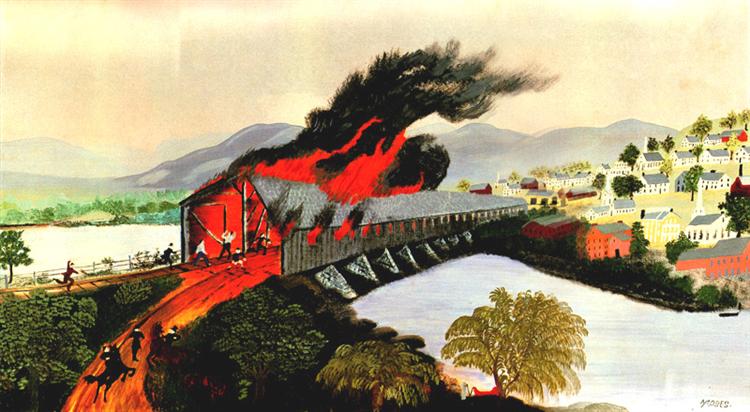 Troy, which lies across the Hudson River from Albany, New York, was the largest city near Grandma Moses' home in Eagle Bridge. Surviving documents suggest that, for a brief period before she married, the future artist did factory work in Troy.
A massive fire in Troy two years after Moses' birth clearly figured prominently in local lore. Moses cut out and saved a commemorative news clipping, published in 1939, and used it as the basis for a series of paintings. The artist's pencil notations on the clipping indicate how she proposed to modify the vignette. The Burning of Troy in 1862, the fifth version she did of the subject, is already quite far removed from the clipping.
Conventional illustration tends to focus on foreground or background, but seldom on both at once. Combining these two views was one hallmark of the "Grandma Moses" style. Thus, in The Burning of Troy Moses has considerably expanded the scene beyond the burning bridge, including more foreground as well as a detailed rendering of the city in the background.