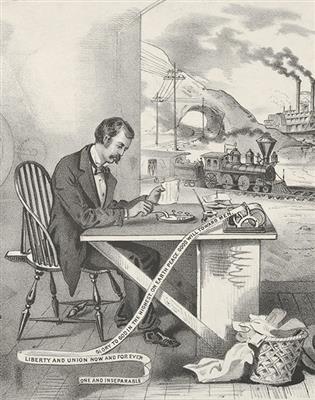 Currier and Ives was a successful American printmaking firm headed by Nathaniel Currier (1813–1888) and James Merritt Ives (1824–1895) based in New York City from 1834 to 1907. The prolific firm produced prints from paintings by fine artists as black and white lithographs that were hand colored. Lithographic prints could be reproduced quickly and purchased inexpensively, and the firm called itself "the Grand Central Depot for Cheap and Popular Prints" and advertised its lithographs as "colored engravings for the people". The firm of Currier and Ives was in operation from 1857-1907.

Nathaniel Currier (1813–88) was born in Roxbury, Massachusetts on March 27, 1813, the second of four children. His parents Nathaniel and Hannah Currier were distant cousins who lived a humble and spartan life. Tragedy struck when Nathaniel was eight years old, when his father unexpectedly died, leaving Nathaniel and his eleven-year-old brother Lorenzo to provide for the family: six-year-old sister Elizabeth and two-year-old brother Charles, as well as their mother.

Nathaniel worked a series of odd jobs to support the family and, at fifteen, he started what became a lifelong career when he apprenticed in the Boston lithography shop of William and John Pendleton. In 1833 at age twenty, he moved to Philadelphia to do contract work for M.E.D. Brown, a noted engraver and printer. Currier's early lithographs were issued under the name of Stodart & Currier, a result of the partnership that he created in 1834 with a local New York printmaker named Stodart. The two men specialized in "job" printing and made a variety of print products, including music manuscripts. Currier became dissatisfied with the poor economic return of their business venture and ended the partnership in 1835. He set up shop alone, working as "N. Currier, Lithographer" until 1856.

In 1835, he created a lithograph that illustrated a fire sweeping through New York City's business district. The print of the Merchant's Exchange sold thousands of copies in four days. Currier realized that there was a market for current news, so he turned out several more disaster prints and other inexpensive lithographs that illustrated local and national events, such as "Ruins of the Planter's Hotel, New Orleans, which fell at two O’clock on the Morning of May 15, 1835, burying 50 persons, 40 of whom Escaped with their Lives". He quickly gained a reputation as an accomplished lithographer. In 1840, he produced "Awful Conflagration of the Steam Boat Lexington", which was so successful that he was given a weekly insert in the New York Sun. In this year, Currier's firm began to shift its focus from job printing to independent print publishing.

The name Currier & Ives first appeared in 1857, when Currier invited the company's bookkeeper and accountant James Merritt Ives (1824–95) to become his partner. Ives was born on March 5, 1824 in New York City, and he married Caroline Clark in 1852. She was the sister-in-law of Nathaniel's brother Charles Currier, and it was Charles who recommended Ives to his brother. Nathaniel Currier soon noticed Ives's dedication to his business, and his artistic knowledge and insight into what the public wanted. The younger man quickly became the general manager of the firm, handling the financial side of the business by modernizing the bookkeeping, reorganizing inventory, and streamlining the print process. Ives also helped Currier interview potential artists and craftsmen. He had a flair for gauging popular interests and aided in selecting the images that the firm would publish and expanding the firm's range to include political satire and sentimental scenes, such as sleigh rides in the country and steamboat races. In 1857, Currier made Ives a full partner.