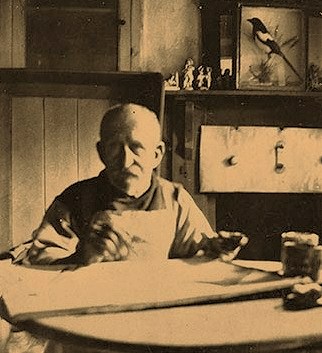 Alfred's parents, Charles and Jane Wallis, were from Penzance in Cornwall and moved to Devonport, Devon to find work in 1850 where Alfred and his brother Charles were born. Later, when Jane Wallis died, the family returned to Penzance. On leaving school Alfred was apprenticed to a basketmaker before becoming a mariner in the merchant service by the early 1870s. He sailed on schooners across the North Atlantic between Penzance and Newfoundland.

Wallis married Susan Ward at St Mary's Church in Penzance in 1876, when he was 20 and his wife was 41. He became stepfather to her five children. He continued as a deep-sea fisherman on the Newfoundland run in the early days of his marriage allowing him to earn a good wage. After the death of his two infant children Alfred switched to local fishing and labouring in Penzance.

The family moved to St. Ives, Cornwall, in 1890 where he established himself as a marine stores dealer, buying scrap iron, sails, rope and other items. In 1912, his business, "Wallis, Alfred, Marine Stores Dealer" closed and Alfred kept busy with odd jobs and worked for a local antiques dealer, Mr Armour, which provided some insight into the world of objets d'art.

Following his wife's death in 1922, Wallis took up painting, as he later told Jim Ede, "for company". He was self-taught, and never had an art lesson.

His paintings are an excellent example of naïve art; perspective is ignored and an object's scale is often based on its relative importance in the scene, giving many of his paintings a map-like quality. Wallis painted seascapes from memory, in large part because the world of sail he knew was being replaced by steamships. As he put it, his subjects were "what use To Bee out of my memory what we may never see again..." Having little money, Wallis improvised with materials, mostly painting on cardboard ripped from packing boxes and using a limited palette of paint bought from ships' chandlers.

In many ways, Wallis' timing was excellent. In 1928, a few years after he had started painting, Ben Nicholson and Kit Wood came to St Ives and established an artist colony. They were delighted to find Wallis and celebrated his direct approach to image-making. Nicholson commented later that 'to Wallis, his paintings were never paintings but actual events'. Wallis was propelled into a circle of some of the most progressive artists working in Britain in the 1930s.

The influence, however, was all one way; Wallis continued to paint as he always had. Nicholson later termed Wallis' art 'something that has grown out of the Cornish seas and earth and which will endure'.

Through Nicholson and Wood, Wallis was introduced to Jim Ede who promoted his work in London. Despite this attention, Wallis sold few paintings and continued to live in poverty until he died in the Madron workhouse near Penzance. He is buried in Barnoon cemetery, overlooking St Ives Porthmeor beach and the Tate St Ives gallery. An elaborate gravestone, depicting a tiny mariner at the foot of a huge lighthouse – a popular motif in Wallis' paintings – was made from tiles by the potter Bernard Leach and covers Wallis' tomb.