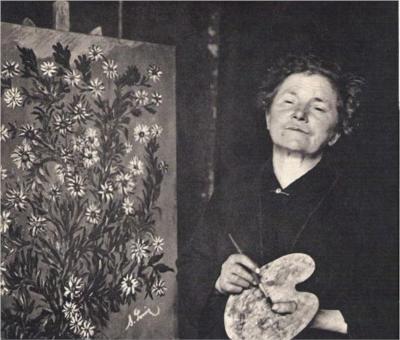 Séraphine Louis, known as Séraphine de Senlis (Séraphine of Senlis) (1864–1942), was a French painter in the naïve style. Self-taught, she was inspired by her religious faith and by stained-glass church windows and other religious art. The intensity of her images, both in colour and replicative design, is sometimes interpreted as a reflection of her own psyche, walking a tightrope between ecstasy and mental illness.

Louis was born in Arsy (Oise) on 3 September 1864. Her father was a manual laborer and her mother came from a farmworking background. Louis's mother died on her first birthday and her father, who remarried, also died before she was seven; at which point, she came under the charge of her eldest sister. She first worked as a shepherdess but, by 1881, she was engaged as a domestic worker at the convent of the Sisters of Providence in Clermont, Oise. Beginning in 1901, she was employed as a housekeeper for middle-class families in the town of Senlis.

In addition to her arduous day jobs, Louis painted by candlelight, largely in secret isolation, until her considerable body of work was discovered in 1912 by German art collector Wilhelm Uhde. While in Senlis, Uhde saw a still-life of apples at his neighbor's house and was astonished to learn that Louis, his housecleaner, was the artist. His support had barely begun to lift her horizons when he was forced to leave France in August 1914; the war between France and Germany had made him an unwelcome outsider in Senlis, much as Louis was, given her eccentric persona. They only re-established contact in 1927 when Uhde – back in France and living in Chantilly – visited an exhibition of local artists in Senlis and, seeing Louis's work, realized that she had survived and her art had flourished. Under Uhde's patronage, Louis began painting large canvases, some of them two meters high, and she achieved prominence as the naïve painter of her day. In 1929, Uhde organized an exhibition, "Painters of the Sacred Heart," that featured Louis's art, launching her into a period of financial success she had never known – and was ill prepared to manage. Then, in 1930, with the effects of the Great Depression destroying the finances of her patrons, Uhde had no choice but to stop buying her paintings.

In 1932, Louis was admitted for chronic psychosis at Clermont's lunatic asylum, where her artistry found no outlet. Although Uhde reported that she had died in 1934, some say that Louis actually lived until 1942 in a hospital annex at Villers-sous-Erquery, where she died friendless and alone. She was buried in a common grave.

Uhde continued to exhibit her work: in 1932, at the exhibition "The Modern Primitives" in Paris; in 1937–38 in an exhibition titled "The Popular Masters of Reality" which showed in Paris, Zurich, and New York (at the Museum of Modern Art); in 1942, at the "Primitives of the 20th Century" exhibition in Paris, and finally, in 1945, in a solo exhibition of her work in Paris.

Louis's works are predominantly rich fantasies of intensely repeated and embellished floral arrangements. She used colours and pigments that she made herself from unusual and exotic ingredients she never revealed that have stood the test of time for durable vividness. Her paintings' surfaces have a matte, almost waxy appearance. Sometimes her signature (typically "S. Louis") was carved by knife, revealing a ground of contrasting colour. In some cases, she appears to have signed her paintings before painting them.