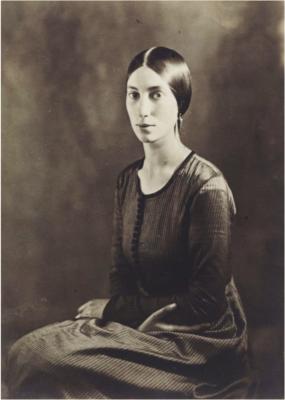 Winifred Margaret Knights (1899–1947) was a British painter. Amongst her most notable works are The Marriage at Cana produced for the British School at Rome, which is now in the Museum of New Zealand Te Papa Tongarewa and her winning Rome Scholarship entry The Deluge which is now held by Tate Britain. Knights’ style was much influenced by the Italian Quattrocento and she was one of several British artists who participated in a revival of religious imagery in the 1920s, while retaining some elements of a modernist style.

Winifred Knights was born on 5 June 1899 in the developing South London suburb of Streatham. From 1912, Knights attended James Allen's Girls' School in Dulwich where she showed an early artistic talent. She pursued formal art training at the Slade School of Fine Art from 1915–17 and again from 1918-20, under the tutelage of Henry Tonks and Fred Brown. During World War One, Knights was traumatised after witnessing the Silvertown explosion at a TNT processing works in January 1917, which led to a break in her studies where she would take refuge at her father's cousins' farm in Worcestershire. At the end of the War, returning to the Slade, Knights began to draw upon personal themes to inspire her work including war and peace, town and country and the social status of men and women. In 1919, Knights painted Leaving the Munitions Works and won the Slade Summer Composition Prize for Mill Hands on Strike. The following year she became the first woman in England to win the prestigious Scholarship in Decorative Painting awarded by the British School at Rome with her critically acclaimed painting The Deluge. In 1920 she became engaged to fellow student Arnold Mason and moved to Italy to complete her scholarship, living at Anticoli Corrado, a small village to the south of Rome. In 1922, the Tate purchased an Italian landscape painted by Knights. She remained in Rome from 1920 to 1925. The relationship with Mason ended and she married fellow Rome Scholar Thomas Monnington on 23 April 1924. Her first major work in Rome, The Marriage at Cana, was completed in 1923. The Tate rejected the painting and it was purchased by the Museum of New Zealand Te Papa Tongarewa.

Knights returned to the Slade in the years 1926-27 and exhibited at both the Imperial Gallery in Kensington and the Duveen Gallery. In the period 1928-33 Knights executed the altarpiece Scenes from the Life of St Martin of Tours for the Milner Memorial Chapel at Canterbury Cathedral. In 1929 Knights was elected to the New English Art Club, but never exhibited with them. In 1933 Stephen Courtauld and his wife Virginia bought Eltham Palace. They commissioned Knights and Monnington, who collaborated with the Swedish interior designer Rolf Engströmer and the Italian decorator Peter Malacrida, to work on the decoration of the interiors of the building. Knights died from a brain tumour in London in 1947 at the age of 47. The first major retrospective of Winifred Knights was held at Dulwich Picture Gallery from June to September 2016.