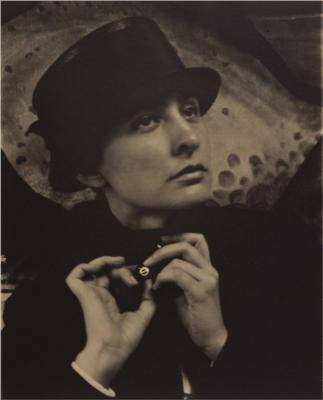 Georgia O’Keeffe was one of the first modernist painters of the United States, and the first female one. O’Keeffe knew she wanted to be an artist from a very young age. After finishing boarding school, where she received formal lessons in painting, O’Keeffe attended the Art Institute of Chicago to become an art teacher. At the beginning of the 20th century, being a teacher was the sole approach a woman could have into the art world in the United States. Her first job as a teacher was at a small women’s college in South Carolina. Here, O’Keeffe created the charcoal pieces that caught the attention of Alfred Stieglitz.

Stieglitz was a famous photographer, and a renowned advocate for the Modernist movement in the arts. Modernism came to the United States through the work of Pablo Picasso, Henri Matisse, Paul Cézanne, and other vanguard painters. In New York City, Stieglitz owned Gallery 291, acknowledged for showing the pieces of these painters. The first time an O’Keeffe drawing was exposed in public was in 1916 at this gallery. Incidentally, she was the first American painter featured at this place. During a great part of her life, she was mentored and influenced by Stieglitz. Thanks to his support, O’Keeffe left the classrooms to finally become an artist. His attention extended throughout all her career; he organized 22 solo exhibitions and several group installations. They became lovers in 1918 and stayed together until Stieglitz´s death in 1946.

O’Keeffe is widely recognized for her technique and themes. She mastered the use of line and composition to create abstract pieces full of simplicity, such as Drawing XIII (1915). During the 1920’s, O’Keeffe started experimenting with vibrant colors to create depictions of flowers and landscapes. Some of her most distinguished paintings were made in this decade: Blue and Green Music(1921), Black Iris III (1926), and Radiator Building – Night, New York (1927). An important part of her life as an artist was spent in New Mexico. There, she felt keen to portray deserts, mountains, and also skulls of animals that represented for her an eternal beauty of the desert. Juxtaposition of these elements was O’Keeffe’s approach to Surrealism.

In the 1930s, people of the United States were redefining the “American lifestyle.” Pieces like Cow’s Skull: Red, White and Blue (1931) represented O’Keeffe’s view on the subject. For her, the true image of America went far beyond the limits of big cities. During the last decades of her life, the artist was working on challenging projects like the 24-foot long canvas of Sky Above Clouds series (1965–1967).

O’Keeffe never wanted to be considered just a "woman artist," and indeed, she surpassed this concept. By abstracting the natural world, O’Keeffe created images that have become a part of the mythology and iconography of the American artistic landscape. The majority of her works is preserved by The Georgia O’Keeffe Museum.

Georgia Totto O'Keeffe (November 15, 1887 – March 6, 1986) was an American artist. She was best known for her paintings of enlarged flowers, New York skyscrapers, and New Mexico landscapes. O'Keeffe has been recognized as the "Mother of American modernism".

In 1905, O'Keeffe began her serious formal art training at the School of the Art Institute of Chicago and then the Art Students League of New York, but she felt constrained by her lessons that focused on recreating or copying what was in nature. In 1908, unable to fund further education, she worked for two years as a commercial illustrator, and then spent seven years between 1911 and 1918 teaching in Virginia, Texas, and South Carolina. During that time, she studied art during the summers between 1912 and 1914 and was introduced to the principles and philosophies of Arthur Wesley Dow, who espoused created works of art based upon personal style, design, and interpretation of subjects, rather than trying to copy or represent them. This caused a major change in the way she felt about and approached art, as seen in the beginning stages of her watercolors from her studies at the University of Virginia and more dramatically in the charcoal drawings that she produced in 1915 that led to total abstraction. Alfred Stieglitz, an art dealer and photographer, held an exhibit of her works in 1917. Over the next couple of years, she taught and continued her studies at the Teachers College, Columbia University in 1914 and 1915.

She moved to New York in 1918 at Stieglitz's request and began working seriously as an artist. They developed a professional relationship—he promoted and exhibited her works—and a personal relationship that led to their marriage in 1924. O'Keeffe created many forms of abstract art, including close-ups of flowers, such as the Red Canna paintings, that many found to represent women's genitalia, although O'Keeffe consistently denied that intention. The reputation of the portrayal of women's sexuality was also fueled by explicit and sensuous photographs that Stieglitz had taken and exhibited of O'Keeffe.

O'Keeffe and Stieglitz lived together in New York until 1929, when O'Keeffe began spending part of the year in the Southwest, which served as inspiration for her paintings of New Mexico landscapes and images of animal skulls, such as Cow's Skull: Red, White, and Blue and Ram's Head White Hollyhock and Little Hills. After Stieglitz's death, she lived permanently in New Mexico at Georgia O'Keeffe Home and Studio in Abiquiú, until the last years of her life when she lived in Santa Fe. In 2014, O'Keeffe's 1932 painting Jimson Weed sold for $44,405,000, more than three times the previous world auction record for any female artist. After her death, the Georgia O'Keeffe Museum was established in Santa Fe.

O'Keeffe was born on November 15, 1887, in a farmhouse located at 2405 Hwy T in the town of Sun Prairie, Wisconsin. Her parents, Francis Calyxtus O'Keeffe and Ida (Totto) O'Keeffe, were dairy farmers. Her father was of Irish descent. Her maternal grandfather George Victor Totto, for whom O'Keeffe was named, was a Hungarian count who came to the United States in 1848.