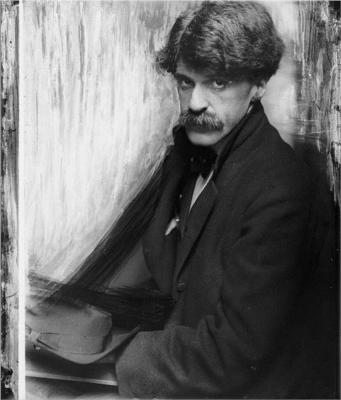 Alfred Stieglitz (January 1, 1864 – July 13, 1946) was an American photographer and modern art promoter who was instrumental over his fifty-year career in making photography an accepted art form. In addition to his photography, Stieglitz was known for the New York art galleries that he ran in the early part of the 20th century, where he introduced many avant-garde European artists to the U.S. He was married to painter Georgia O'Keeffe.

Stieglitz attended Charlier Institute, a Christian school and the best private school in New York, in 1871. The following year, his family began spending the summers at Lake George in the Adirondack Mountains, a tradition that continued into Stieglitz's adulthood.

So that he would qualify for admission to the City College of New York, Stieglitz was enrolled in a public school for his senior year of high school, but found the education inadequate. In 1881, Edward Stieglitz sold his company for US$400,000 and moved his family to Europe for the next several years so that his children would receive a better education. Alfred Stieglitz enrolled in the Real gymnasium in Karlsruhe. The next year, Stieglitz studied mechanical engineering at the Technische Hochschule in Berlin. He enrolled in a chemistry class taught by Hermann Wilhelm Vogel, a scientist and researcher, who worked on the chemical processes for developing photographs. In Vogel, Stieglitz found both the academic challenge he needed and an outlet for his growing artistic and cultural interests. He received an allowance of $1,200 (equivalent to $30,430 in 2017) a month.

German artists Adolf von Menzel and Wilhelm Hasemann were his friends. He bought his first camera and traveled through the European countryside, taking photographs of landscapes and peasants in Germany, Italy and the Netherlands.

In 1884, his parents returned to America, but 20-year-old Stieglitz remained in Germany and collected books on photography and photographers in Europe and the U.S. Through his self-study, he saw photography as an art form. In 1887, he wrote his very first article, "A Word or Two about Amateur Photography in Germany", for the new magazine The Amateur Photographer. He then wrote articles on the technical and aesthetic aspects of photography for magazines in England and Germany.

He won first place for his photography, The Last Joke, Bellagio, in 1887 from Amateur Photographer. The next year he won both first and second prizes in the same competition, and his reputation began to spread as several German and British photographic magazines published his work.

In 1890, his sister Flora died while giving birth, and Stieglitz returned to New York.

Stieglitz considered himself an artist, but he refused to sell his photographs. His father purchased a small photography business for him so that he could earn a living in his chosen profession. Because he demanded high quality images and paid his employee high wages, the Photochrome Engraving Company rarely made a profit. He regularly wrote for The American Amateur Photographer magazine. He won awards for his photographs at exhibitions, including the joint exhibition of the Boston Camera Club, Photographic Society of Philadelphia and the Society of Amateur Photographers of New York.