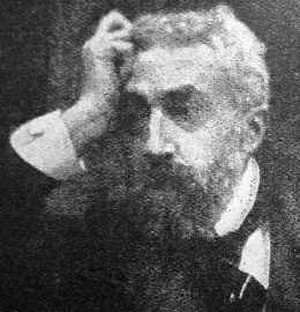 Robert Demachy (1859–1936) was a prominent French Pictorial photographer of the late 19th and early 20th century. He is best known for his intensely manipulated prints that display a distinct painterly quality.

Léon-Robert Demachy was born in the home of his grandmother in Saint-Germain-en-Laye, on the outskirts of Paris, on 7 July 1859. His parents, Charles Adolphe Demachy (1818–1888) and Zoé Girod de l’Ain (1827–1916), had two other sons, Charles Amédée (1852–1911) and Adrien Édouard (1854–1927), and a daughter, Germaine (1856-1940?). The elder Charles had started the highly successful financial enterprise of Banque Demachy, and by the time Demachy was born the family was very wealthy. He had no need to earn a living, and there is no record of his having ever been employed anywhere. He dropped the first part of his name in his childhood and was always known as "Robert".

After his birth his family returned to their mansion at 13 Rue François Premier in Paris, where Demachy continued to live for the next fifty years. His early years were quite idyllic, and each year his family would spend several months at their summer villa near Villers-sur-Mer in Normandy. The rest of the year he was educated in Jesuit schools in Paris, and he became fluent in English by the time he was a teenager. His education also included extensive musical lessons, and he became an accomplished violin player.

About 1870, Demachy, his mother and his siblings left Paris for Brussels due to the increasing dangers of the Franco-Prussian War. His father stayed in Paris as part of the Commune and the Banque Demachy played an important role in financing the resistance efforts.

When he turned eighteen Demachy briefly served a year as an army volunteer, but he soon returned to his life of comfort. In the mid-1870s he began frequenting the artists’ cafés and, perhaps in rebellion to his gentrified life, he became involved in the growing bohemian culture that was beginning to take hold in Paris. He began making sketches of café patrons and people on the street, a practice he continued throughout his life.

Sometime in the late 1870s he began experimenting with photography. It’s not known what or who influenced him to become involved, but he could devote as much time and money to this endeavor as he wanted and he quickly became highly proficient with a camera. For the next thirty years he devoted all of his time to both taking photographs and writing extensively about photography.

In 1882 Demachy was elected to the Société française de photographie, where he interacted with some of the leading photographers in Europe. Within a few years he became frustrated with the conservative views of many of the photographers around him, and in 1888 he joined with Maurice Bucquet to form the new Photo-Club de Paris. The members of the Photo-Club advocated the aesthetics of Pictorialist photography, and soon the Photo-Club was playing a similar role in France as that of the Photo-Secession in the U.S.

In 1889, while visiting the Exposition Universelle in Paris, he met a young woman from Detroit, Michigan, named Julia Adelia Delano. Adelia, as she was called, was a member of the important Delano family in America and a distant relative of future American President Franklin Delano Roosevelt. Little is known about their courtship, but on 2 May 1893 Robert and Adelia were married in Paris. They lived in the family mansion on Rue François Premier. Their first son, Robert-Charles, was born in 1894, followed by son Jacques François in 1898. Jacques later became a very well known fashion illustrator