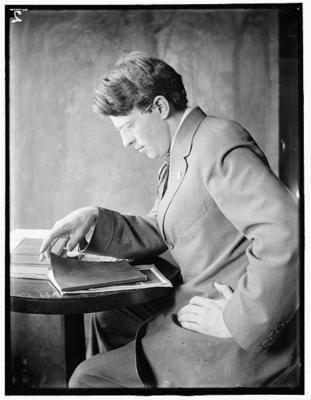 Clarence Hudson White (April 8, 1871 – July 7, 1925) was an American photographer, teacher and a founding member of the Photo-Secession movement. He grew up in small towns in Ohio, where his primary influences were his family and the social life of rural America. After visiting the World's Columbian Exposition in Chicago in 1893, he took up photography. Although he was completely self-taught in the medium, within a few years he was internationally known for his pictorial photographs that captured the spirit and sentimentality of America in the early twentieth century. As he became well known for his images, White was sought out by other photographers who often traveled to Ohio to learn from him. He became friends with Alfred Stieglitz and helped advance the cause of photography as a true art form. In 1906 White and his family moved to New York City in order to be closer to Stieglitz and his circle and to further promote his own work. While there he became interested in teaching photography and in 1914 he established the Clarence H. White School of Photography, the first educational institution in America to teach photography as art. Due to the demands of his teaching duties, his own photography declined and White produced little new work during the last decade of his life. In 1925 he suffered a heart attack and died while teaching students in Mexico City.

White was born in 1871 in West Carlisle, Ohio, the second son and youngest child of Lewis Perry White and Phebe Billman White. He was raised in what was known as "The American House," a large tavern built by his great-grandfather and Ohio pioneer settler Augustine White in 1817. His childhood was described as "idyllic", and, unlike many children of the time, he grew up in good health and with no deaths or tragedies in his family. He and his brother Pressley, who was two years older, spent much of their time playing in the fields and hills near their small hometown.

When White was sixteen the family moved to the small town of Newark, Ohio, where his father accepted a job as traveling salesman for the wholesale grocery firm of Fleek and Neal. With his father gone much of the time White was left to pursue his own interests, and he became a serious student of the violin. From his late teens into his mid-twenties White kept a diary in which recorded both the events of his days and also his interests and opinions. He wrote increasingly of his interest in music and pictorial arts; there is no mention of photography in his diaries of this period.

After high school White became a bookkeeper at the firm where his father worked. He was a diligent worker, but his job gave him little opportunity to pursue his artistic interests. He wrote that he reported to work at 7 am six days a week and left at 6 in the evening, sometimes working on Sundays when things were really busy. His maternal uncle Ira Billman, who was a published poet, encouraged White to continue developing his creative skills, and by 1890 White was producing sketchbooks filled with pencil sketches, pen-and-ink drawings and watercolors.