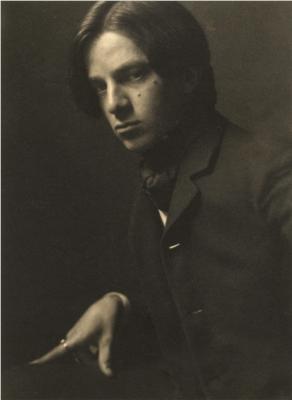 Alvin Langdon Coburn (June 11, 1882 – November 23, 1966) was an early 20th-century photographer who became a key figure in the development of American pictorialism. He became the first major photographer to emphasize the visual potential of elevated viewpoints and later made some of the first completely abstract photographs.

Coburn was born on June 11, 1882, at 134 East Springfield Street in Boston, Massachusetts, to a middle-class family. His father, who had established the successful firm of Coburn & Whitman Shirts, died when Alvin was seven. After that he was raised solely by his mother, Fannie, who remained the primary influence in his early life, even though she remarried when he was a teenager. In his autobiography, Coburn wrote, "My mother was a remarkable woman of very strong character who tried to dominate my life…It was a battle royal all the days of our life together."

In 1890 the family visited his maternal uncles in Los Angeles, and they gave him a 4 x 5 Kodak camera. He immediately fell in love with the camera, and within a few years he had developed a remarkable talent for both visual composition and technical proficiency in the darkroom. When he was sixteen years old, in 1898, he met his cousin F. Holland Day, who was already an internationally known photographer with considerable influence. Day recognized Coburn’s talent and both mentored him and encouraged him to take up photography as a career.

At the end of 1899 his mother and he moved to London, where they met up with Day. Day had been invited by the Royal Photographic Society to select prints from the best American photographers for an exhibition in London. He brought more than a hundred photographs with him, including nine by Coburn – who at this time was only 17 years old. With the help of his cousin Coburn’s career took a giant first step.

Coburn’s prints at the Royal Photographic Society attracted the attention of another important photographer, Frederick H. Evans. Evans was one of the founders of the Linked Ring, an association of artistic photographers which was considered at that time to be the highest authority for photographic aesthetics. In the summer of 1900 Coburn was invited to exhibit with them, which elevated him to the ranks of some of the most elite photographers of the day.

In 1901 Coburn lived in Paris for a few months so he could study with photographer Edward Steichen and Robert Demachy. He and his mother then toured France, Switzerland and Germany for the remainder of the year.

When they returned to America in 1902, Coburn began studying with famed photographer Gertrude Käsebier in New York. He opened a photography studio on Fifth Avenue but spent much of his time that year studying with Arthur Wesley Dow at his School of Art in Massachusetts. At the same time, his mother continued to promote her son whenever she could. Stieglitz once told an interviewer, "Fannie Coburn devoted much energy trying to convince both Day and me that Alvin was a greater photographer than Steichen."