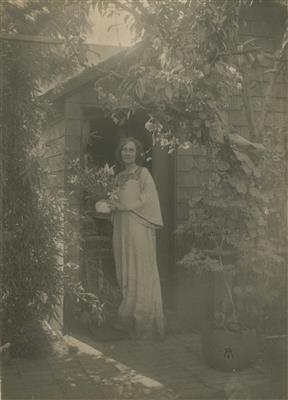 Anne Wardrope (Nott) Brigman (1869–1950) was an American amateur photographer and one of the original members of the Photo-Secession movement in America.


Her most famous images were taken between 1900 and 1920, and depict nude women in primordial, naturalistic contexts.


Brigman was born in the Nu‘uanu Pali above Honolulu, Hawaii, on 3 December 1869. She was the oldest of eight children born to Mary Ellen Andrews Nott, whose parents moved to Hawaii as missionaries in 1828. Her father, Samuel Nott, was from Gloucester, England. When she was sixteen her family moved to Los Gatos, California, and nothing is known about why they moved or what they did after arriving in California. In 1894 she married a sea captain, Martin Brigman. She accompanied her husband on several voyages to the South Seas, returning to Hawaii at least once.


Imogen Cunningham recounts a story supposedly told to her firsthand that on one of the voyages Brigman fell and injured herself so badly that one breast was removed. This story was never confirmed by Brigman or anyone else, but by 1900 Brigman stopped traveling with her husband and resided in Oakland, California.


The couple separated before 1910 and she lived in a cabin on Thirty-Second Street with her dog Rory, a dozen tamed birds, and occasionally with her mother. She was active in the growing bohemian community of the San Francisco Bay Area and became close friends with the Oakland writer Jack London and the Berkeley poet and naturalist Charles Keeler. Perhaps seeking her own artistic outlet, she began photographing in 1901. Soon she was exhibiting and within two years she had developed a reputation as a master of pictorial photography. The first public display of her work came in January 1902 with other members of the California Camera Club at San Francisco's Second Photographic Salon in the Mark Hopkins Institute of Art. Her Portrait of Mr. Morrow was singled out in the press and was reproduced in the popular monthly Camera Craft. That journal praised her photos at the Los Angeles Salon of 1902 and over the next decade reproduced over a dozen of her prints. She used a shared darkroom (a converted barn) on Oakland's Brockhurst Street.


Brigman's career quickly accelerated at home. After her success at San Francisco's Third Photographic Salon (1903), she opened a teaching studio in Berkeley which attracted many University co-eds. Soon her allegorical studies appeared in Photograms of the Year and her portraits of California celebrities, such as the rakish Herman Whitaker, were featured in two issues of Sunset magazine. A partial list of her California exhibitions, which were reviewed extensively in the press between 1904 and 1908, includes the: Fourth and Fifth Annual Exhibitions of the Oakland Art Fund sponsored by the Starr King Fraternity; Palette, Lyre and Pen Club of Oakland (solo exhibit); Vickery, Atkins & Torrey Gallery in San Francisco (solo exhibit); Arts and Crafts Exhibition in Los Angeles; Paul Elder Gallery in San Francisco (solo exhibit); California Guild of Arts and Crafts in San Francisco; Oakland Club Room (solo show); First and Second Annuals of the Berkeley Art Association; Alameda County Exposition in Oakland’s Idora Park; Ebell Clubhouse in Oakland; and Del Monte Art Gallery in Monterey. She often lectured and on one occasion in October 1906 she summarized her philosophy on the Art of Photography at a well-attended event for Berkeley’s Town and Gown Club. Her celebrity status was confirmed in July 1907 when Emily J. Hamilton assessed Brigman and many of her famous photographs in a full-page Sunday magazine article for the San Francisco Call entitled “Lens Studies of a Photo-Secessionist.” In 1907 Brigman completed eight illustrations for William E. Henley’s poem I Am the Captain of My Soul. Her “artists’ teas” in Oakland and Berkeley became occasions when the Bay Area’s famous painters, literati and actors mingled; among the prominent local photographers habitually in attendance were Oscar Maurer, Laura Adams Armer, Emily H. Pitchford, Adelaide Hanscom Leeson, and Oscar V. Lange. Her popularity with the public was slightly tarnished when her famous study of an undraped female nude, The Soul of the Blasted Pine, was criticized, sidelined and then removed from the 1908 Idora Park Exposition for being a vulgar photograph of a “scrawny dame.” Brigman angrily withdrew the image from the display.