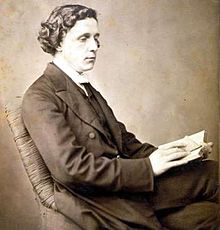 Charles Lutwidge Dodgson (/ˈlʌtwɪdʒ ˈdɒdsən/; 27 January 1832 – 14 January 1898), better known by his pen name Lewis Carroll, was an English writer, mathematician, logician, Anglican deacon, and photographer. His most famous writings are Alice's Adventures in Wonderland, its sequel Through the Looking-Glass, which includes the poem "Jabberwocky", and the poem The Hunting of the Snark – all examples of the genre of literary nonsense. He is noted for his facility at word play, logic and fantasy. There are societies in many parts of the world dedicated to the enjoyment and promotion of his works and the investigation of his life.

Dodgson's family was predominantly northern English, with Irish connections, conservative and High Church Anglican. Most of Dodgson's male ancestors were army officers or Church of England clergy. His great-grandfather, also named Charles Dodgson, had risen through the ranks of the church to become the Bishop of Elphin. His paternal grandfather, another Charles, had been an army captain, killed in action in Ireland in 1803 when his two sons were hardly more than babies. The older of these sons – yet another Charles Dodgson – was Carroll's father. He went to Westminster School and then to Christ Church, Oxford. He reverted to the other family tradition and took holy orders. He was mathematically gifted and won a double first degree, which could have been the prelude to a brilliant academic career. Instead, he married his first cousin Frances Jane Lutwidge in 1827 and became a country parson.

Dodgson was born in the small parsonage at Daresbury in Cheshire near the towns of Warrington and Runcorn, the eldest boy but already the third child of the four-and-a-half-year-old marriage. Eight more children followed. When Charles was 11, his father was given the living of Croft-on-Tees in North Yorkshire, and the whole family moved to the spacious rectory. This remained their home for the next 25 years.

Charles's father was an active and highly conservative cleric of the Church of England who later became the Archdeacon of Richmond and involved himself, sometimes influentially, in the intense religious disputes that were dividing the church. He was high church, inclining to Anglo-Catholicism, an admirer of John Henry Newman and the Tractarian movement, and did his best to instil such views in his children. Young Charles was to develop an ambiguous relationship with his father's values and with the Church of England as a whole.

During his early youth, Dodgson was educated at home. His "reading lists" preserved in the family archives testify to a precocious intellect: at the age of seven, he was reading books such as The Pilgrim's Progress. He also suffered from a stammer – a condition shared by most of his siblings – that often influenced his social life throughout his years. At the age of twelve, he was sent to Richmond Grammar School (now part of Richmond School) at nearby Richmond.

In 1846, Dodgson entered Rugby School where he was evidently unhappy, as he wrote some years after leaving:

Scholastically, though, he excelled with apparent ease. "I have not had a more promising boy at his age since I came to Rugby", observed mathematics master R. B. Mayor.