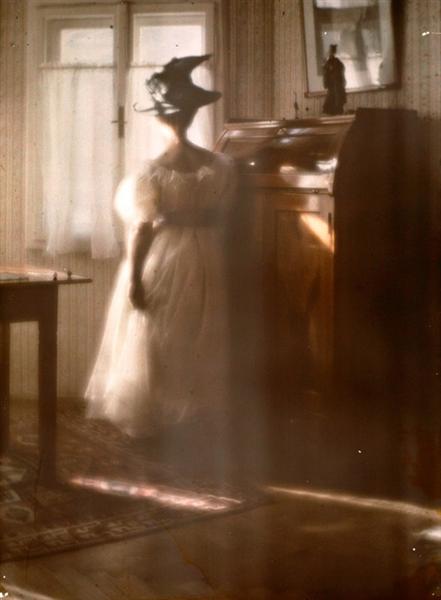 Pictorialism is the name given to an international style and aesthetic movement that dominated photography during the later 19th and early 20th centuries. There is no standard definition of the term, but in general it refers to a style in which the photographer has somehow manipulated what would otherwise be a straightforward photograph as a means of "creating" an image rather than simply recording it. Typically, a pictorial photograph appears to lack a sharp focus (some more so than others), is printed in one or more colors other than black-and-white (ranging from warm brown to deep blue) and may have visible brush strokes or other manipulation of the surface. For the pictorialist, a photograph, like a painting, drawing or engraving, was a way of projecting an emotional intent into the viewer's realm of imagination.

Pictorialism as a movement thrived from about 1885 to 1915, although it was still being promoted by some as late as the 1940s. It began in response to claims that a photograph was nothing more than a simple record of reality, and transformed into an international movement to advance the status of all photography as a true art form. For more than three decades painters, photographers and art critics debated opposing artistic philosophies, ultimately culminating in the acquisition of photographs by several major art museums.

Pictorialism gradually declined in popularity after 1920, although it did not fade out of popularity until the end of World War II. During this period the new style of photographic Modernism came into vogue, and the public's interest shifted to more sharply focused images. Several important 20th-century photographers began their careers in a pictorialist style but transitioned into sharply focused photography by the 1930s.

Photography as a technical process involving the development of film and prints in a darkroom originated in the early 19th century, with the forerunners of traditional photographic prints coming into prominence around 1838–1840. Not long after the new medium was established, photographers, painters and others began to argue about the relationship between the scientific and artistic aspects of the medium. As early as 1853, English painter William John Newton proposed that the camera could produce artistic results if the photographer would keep an image slightly out of focus. Others vehemently believed that a photograph was equivalent to the visual record of a chemistry experiment. Photography historian Naomi Rosenblum points out that "the dual character of the medium — its capacity to produce both art and document — [was] demonstrated soon after its discovery ... Nevertheless, a good part of the nineteenth century was spent debating which of these directions was the medium's true function."

These debates reached their peak during the late nineteenth and early twentieth centuries, culminating in the creation of a movement that is usually characterized as a particular style of photography: pictorialism. This style is defined first by a distinctly personal expression that emphasizes photography's ability to create visual beauty rather than simply record facts. However, recently historians have recognized that pictorialism is more than just a visual style. It evolved in direct context with the changing social and cultural attitudes of the time, and, as such, it should not be characterized simply as a visual trend. One writer has noted that pictorialism was "simultaneously a movement, a philosophy, an aesthetic and a style."