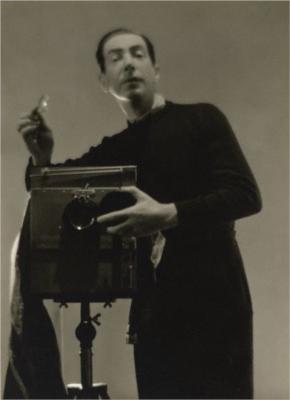 Baron Adolph de Meyer (1 September 1868 – 6 January 1946) was a photographer famed for his photographic portraits in the early 20th century, many of which depicted celebrities such as Mary Pickford, Rita Lydig, Luisa Casati, Billie Burke, Irene Castle, John Barrymore, Lillian Gish, Ruth St. Denis, King George V of the United Kingdom, and Queen Mary. He was also the first official fashion photographer for the American magazine Vogue, appointed to that position in 1913.

Reportedly born in Paris and educated in Dresden, Adolphus Meyer was the son of a German Jewish father and Scottish mother—Adolphus Louis Meyer and his wife, the former Adele Watson.

In 1893 he joined the Royal Photographic Society and moved to London in 1895.

In editions dating from 1898 until 1913, Whitaker's Peerage stated that de Meyer's title had been granted in 1897 by Frederick Augustus III of Saxony, though another source states "the photographer inherited it from his grandfather in the 1890s". Some sources state that no evidence of this nobiliary creation, however, has been found.

On 25 July 1899, at Holy Trinity Church, Sloane Street, Cadogan Square, in London, England, de Meyer married Donna Olga Caracciolo, an Italian noblewoman who had been divorced earlier that year from Nobile Marino Brancaccio; some said she was a goddaughter of Edward VII. The couple reportedly met in 1897, at the home of a member of the Sassoon banking family, and Olga would be the subject of many of her husband's photographs.

The de Meyers' marriage was one of convenience rather than romantic love, since the groom was homosexual and the bride was bisexual or lesbian. As Baron de Meyer wrote in an unpublished autobiographical novel, before they wed, he explained to Olga "the real meaning of love shorn of any kind of sensuality". He continued by observing, "Marriage based too much on love and unrestrained passion has rarely a chance to be lasting, whilst perfect understanding and companionship, on the contrary, generally make the most durable union."

After the death of his wife in 1931, Baron de Meyer became romantically involved with a young German, Ernest Frohlich (born circa 1914), whom he hired as his chauffeur and later adopted as his son. The latter went by the name Baron Ernest Frohlich de Meyer.

From 1898 to 1913 de Meyer lived in fashionable Cadogan Gardens, London, and between 1903 and 1907 his work was published in Alfred Stieglitz's quarterly Camera Work. Cecil Beaton dubbed him "the Debussy of photography". In 1912 he photographed Nijinsky in Paris.

On the outbreak of World War I, the de Meyers, who in 1916 took the new names of Mahrah and Gayne, on the advice of an astrologer, moved to New York City, where he became a photographer for Vogue from 1913–21, and for Vanity Fair. In 1922 de Meyer accepted an offer to become the Harper's Bazaar chief photographer in Paris, spending the next 16 years there.