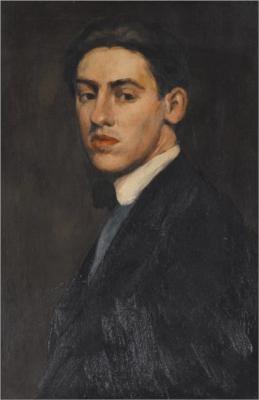 Charles Demuth wasn't just a product of America's transformative early-20th century; he was one of its archetypes. Demuth was a principal member of the Precisionism, the first indigenous modern art movement in the United States. Challenging the boundaries of race, class, sexuality, and artistic tradition, he digested the shifting social landscape around him and left behind a memorable body of work that defies categorization.

Charles Demuth was born into a well-off patrician family. Although they never achieved any conspicuous wealth, by a small-town standard it was enough that Demuth never had to work for a living in his life. He entered society with a sort of prodigal confidence, and although the absence of any social or economic ambitions gave him an enormous amount of freedom, it also contributed to his aimlessness and later frivolity. From an early age he considered himself an outsider, and around the age of five he succumbed to a hip illness which left him lame, but with which he physically coped quite well later on in his adult years. The prescribed cure for his mysterious disease (which was later identified as Perthes) was six weeks, followed by several years, in bed; this lead to his almost total dependency of his mother, Augusta, and left him with the life-long image as an invalid.

Demuth was an introvert, absorbed in his own private world, and although he didn’t inherit his father’s strong physical genes, he coincided with him at least in one area - art. Among Charles’ great aunts and great uncles on his father’s side there were a lot of amateur painters. His father had also dabbled in amateur photography, though his passion for it had sprung from an antiquarian and historical pursuit instead of an aesthetic one. It was clear that the young Charles displayed an unusually precocious gift for art. While he was bedridden with disease, his mother had sent him to a local painter, Martha Bowman, to encourage the aptitude he had shown with crayons and watercolors. His decorative instincts, and his proclivity for subjective renderings, gave the works of the teenage boy an uncommon delicacy for such an early adolescent artistic endeavors.

At sixteen, Demuth enrolled in the Franklin and Marshall Academy, a boys’ preparatory school in Lancaster. After graduation, he did not immediately pursue art school, but instead remained at his home in Lancaster for more than two school years. No one in his family besides Aaron Eshlman (who wasn’t the best role model, having abandoned his wife and children) had pursued painting as a professional occupation. However, in 1903, Demuth entered the Drexel Institute of Art, Science, and Industry in Philadelphia as an elementary art student, and in 1905 he entered the Pennsylvania Academy of Fine Arts, where he had William Merritt Chase and Thomas Anschutz as teachers.

In 1907, Demuth went to Paris, and his interactions with the local artistic styles, expressive forms and colors defined his later work. He was one of the few American painters of that period who had a complete understanding of the new European movements, such as Cubism or Dada. Demuth evolved in his art, always remaining receptive throughout his career to a wide range of styles and influences, which were intelligently transmuted in his works. Between 1912 and 1913, Demuth’s early watercolors reveal a fragile, understated style, with landscapes executed in delicate washes, evoking his European associations and inspirations. By 1915, he was already established as a major American artist through his flower studies, landscapes, and depictions of circus or cabaret performers.

Demuth used the cubist technique with delicacy, developing the new precisionist style in his paintings of various industrial sites and factories, like in White Architecture (1917). Another painting from that period, Two Acrobats (1918), depicts entertainers that surrealistically float through a vague landscape, reflecting Demuth’s strong taste for the psychologically distorted, decadence and deep sexual conflict.

In the late 1910s and early 1920s Demuth repeatedly traveled to Paris. As a gay man, he found the city more accepting than much of the United States, and a number of his paintings - which were not intended for public view at the time he painted them - vividly depict the vibrant gay subculture of postwar Paris. The Lafayette Baths became one of his favorite haunts, and is likely the setting of aTurkish Bath with Self Portrait (1918). In 1921, illness forced Demuth to be admitted to hospital. He was treated and released, but was too unwell to return to America for two more months. Finally back home in Lancaster he was diagnosed with diabetes and began experimental treatments, including a near-starvation diet and insulin injections.

In 1923, Demuth began painting his series of "poster portraits", symbolic interpretations of the works of fellow artists and writers, including Georgia O'Keeffe, Arthur Dove, John Marin, Gertrude Stein, and William Carlos Williams. That same year, Demuth became one of the first of his contemporaries to have work purchased for the Metropolitan Museum of Art's permanent collection. During the mid-1920s, he had several successful solo exhibitions and in 1927, the first book on his work was published, and he began his latest major series of seven paintings, based on the architecture of Lancaster. The paintings became iconic representations of the industrialization of small-town America and cemented Demuth's reputation as the leading painter of the Precisionist movement, the first home-grown modern art movement within the United States.

Demuth died in 1935 in Lancaster at age 51 due to complications from diabetes. In his will, he stipulated that many of his paintings should go to Georgia O'Keefe, whose role in determining which museums received his works helped preserve and fortify his reputation. Demuth was one of the first painters to give modernist form a distinctly American point of view, thus the significance of his work to the development of art in this country throughout the 20th century cannot be overstated. The influence of his industrial landscapes can immediately be seen in the works of Charles Sheeler, Stuart Davis, Gerald Murphy, and Ralston Crawford. By helping to develop an American offshoot of modernism, Demuth became a forerunner to later movements such asAbstract Expressionism and Pop Art.

Charles Henry Buckius Demuth (November 8, 1883 – October 23, 1935) was an American watercolorist who turned to oils late in his career, developing a style of painting known as Precisionism.

"Search the history of American art," wrote Ken Johnson in The New York Times, "and you will discover few watercolors more beautiful than those of Charles Demuth. Combining exacting botanical observation and loosely Cubist abstraction, his watercolors of flowers, fruit and vegetables have a magical liveliness and an almost shocking sensuousness."

Demuth was a lifelong resident of Lancaster, Pennsylvania. The home he shared with his mother is now the Demuth Museum, which showcases his work. He graduated from Franklin & Marshall Academy before studying at Drexel University and at Philadelphia's Pennsylvania Academy of Fine Arts. While he was a student at PAFA, he participated in a show at the Academy, and also met William Carlos Williams at his boarding house. The two were fast friends and remained close for the rest of their lives.

He later studied at Académie Colarossi and Académie Julian in Paris, where he became a part of the avant garde art scene. The Parisian artistic community was accepting of Demuth's homosexuality. After his return to America, Demuth retained aspects of Cubism in many of his works.

Throughout his life, Demuth remained deeply attached to his place of birth, Lancaster, in which his family had owned a tobacco shop since 1770. Demuth's fondness for and attachment to Lancaster is reflected within the subject matter of many of his works. Demuth either suffered an injury when he was four years old, or may have had polio or tuberculosis of the hip, leaving him with a marked limp and requiring him to use a cane. He later developed diabetes and was one of the first people in the United States to receive insulin. Demuth pronounced his surname with emphasis upon the first syllable, earning him the nickname "Deem" among close friends. From 1909 onwards, Demuth maintained a romantic relationship with Robert Evans Locher, an Art Deco interior decorator and stage designer.

While he was in Paris he met Marsden Hartley by walking up to a table of American artists and asking if he could join them. He had a great sense of humor, rich in double entendres, and they asked him to be a regular member of their group. Through Hartley he met Alfred Stieglitz and became a member of the Stieglitz group. In 1926, he had a one-man show at the Anderson Galleries and another at Intimate Gallery, the New York gallery run by Stieglitz. Demuth was introduced to modernism during trips to Europe between 1907 and 1921. On frequent trips to New York, he encountered avant-garde styles and ideas, most notably Cubism, the influence of which is reflected in many of his works.

His most famous painting, I Saw the Figure 5 in Gold, was inspired by his friend William Carlos Williams's poem "The Great Figure". Roberta Smith described the work in The New York Times: "Demuth's famous visionary accounting of Williams, I Saw the Figure Five in Gold, [is] a painting whose title and medallion-like arrangement of angled forms were both inspired by a verse the poet wrote after watching a fire engine streak past him on a rainy Manhattan street while waiting for Marsden Hartley, whose studio he was visiting, to answer his door." Describing its importance, Judith H. Dobrzynski in The Wall Street Journal wrote: "It's the best work in a genre Demuth created, the "poster portrait". It's a witty homage to his close friend, the poet William Carlos Williams, and a transliteration into paint of his poem, "The Great Figure". It's a decidedly American work made at a time when U.S. artists were just moving beyond European influences. It's a reference to the intertwined relationships among the arts in the 1920s, a moment of cross-pollination that led to American Modernism. And it anticipates pop art."