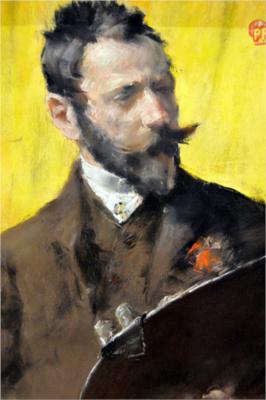 William Merritt Chase (November 1, 1849 – October 25, 1916) was an American painter, known as an exponent of Impressionism and as a teacher. He is also responsible for establishing the Chase School, which later would become Parsons The New School for Design.

William Merritt Chase was born on November 1, 1849, in Williamsburg (now Nineveh), Indiana, to the family of Sarah Swain and David H. Chase, a local businessman. Chase's father moved the family to Indianapolis in 1861, and employed his son as a salesman in the family business. Chase showed an early interest in art, and studied under local, self-taught artists Barton S. Hays and Jacob Cox.

After a brief stint in the Navy, Chase's teachers urged him to travel to New York to further his artistic training. He arrived in New York in 1869, met and studied with Joseph Oriel Eaton for a short time, then enrolled in the National Academy of Design under Lemuel Wilmarth, a student of the famous French artist Jean-Léon Gérôme.

In 1870, declining family fortunes forced Chase to leave New York for St. Louis, Missouri, where his family was then based. While he worked to help support his family he became active in the St. Louis art community, winning prizes for his paintings at a local exhibition. He also exhibited his first painting at the National Academy in 1871. Chase's talent elicited the interest of wealthy St. Louis collectors who arranged for him to visit Europe for two years, in exchange for paintings and Chase's help in securing European art for their collections.

In Europe, Chase settled at the Academy of Fine Arts, Munich, a long-standing center of art training that was attracting increasing numbers of Americans and attracted Chase because it had fewer distractions than Paris. He studied under Alexander von Wagner and Karl von Piloty, and befriended American artists Walter Shirlaw, Frank Duveneck, and J(oseph) Frank Currier.

In Munich, Chase employed his rapidly burgeoning talent most often in figurative works that he painted in the loosely brushed style popular with his instructors. In January 1876 one of these figural works, a portrait titled "Keying Up" – The Court Jester (now in the collection of the Pennsylvania Academy of the Fine Arts) was exhibited at the Boston Art Club; later that year it was exhibited and won a medal at the Philadelphia Centennial Exposition, and this success gained Chase his first fame.

Chase traveled to Venice, Italy in 1877 with Duveneck and John Henry Twachtman before returning to the United States in the summer of 1878, a highly skilled artist representing the new wave of European-educated American talent. Home in America, he exhibited his painting Ready for the Ride (collection of the Union League Club) with the newly formed Society of American Artists in 1878. He also opened a studio in New York in the Tenth Street Studio Building, home to many of the important painters of the day. He was a member of the Tilers, a group of artists and authors, among whom were some of his notable friends: Winslow Homer, Arthur Quartley and Augustus Saint Gaudens.