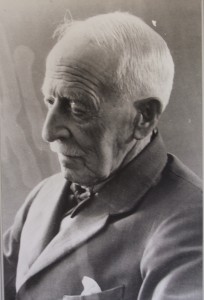 Julian Rossi Ashton CBE (27 January 1851 – 27 April 1942) was an English-born Australian artist and teacher, known for his support of the Heidelberg School and for his influential art school in Sydney.

Ashton was born in Addlestone, Surrey, the son of American amateur painter Thomas Briggs Ashton, and his wife Henrietta, daughter of Count Carlo Rossi, a Sardinian diplomat who married the soprano Henriette Sontag. The family moved to Penzance, Cornwall shortly after, and lived at Burley Grove, Gulval. His father died in 1864, and around age 15 he began working in the engineers' office of either the Great Western Railway or Great Eastern Railway. There he remained for 6 years using his entire leisure time painting at South Kensington. He then went to Paris to study and began illustrating books. He also had considerable success as a painter, exhibiting at the Royal Academy of Arts and elsewhere.

Ashton emigrated to Melbourne in 1878 under contract to David Syme's Illustrated Australian News and lived there for 5 years before moving to Sydney.

He had a background in the contemporary French realism of the Barbizon School, which emphasised painting en plein air (i.e. direct from nature, as opposed to studio-based painting), and which laid the basis for the Impressionist movement. As a trustee of the Art Gallery of New South Wales he championed emerging Australian artists of the Australian Impressionist or Heidelberg School, and the Gallery's decision to collect these works owes much to his influence. Ashton is known for his paintings Evening, Merri Creek (1882), A Solitary Ramble (1888) and others.

George Lambert painted a portrait of Ashton which is in the Art Gallery of New South Wales. Lambert showed Ashton, then 77, with white hair and a military-type moustache, dressed in a grey suit and a dapper bow-tie, cigar in hand, sitting beside a table with a mass of objects. The cigar and wine suggest 'good living' and the flowers and fruit may have referred to Ashton's role as a gardener. Behind him there is a deep red curtain draped over a gold picture frame, behind which there is a curtain, creating an abstract arrangement of bold colours, with the frame suggesting Ashton's role as an artist, teacher and patron.

The Sydney Art School (also known as the Julian Ashton Art School), which Ashton established in 1890 as the "Academy Julian", (perhaps a reference to the Académie Julian in Paris) has been an influential art school in Australia.