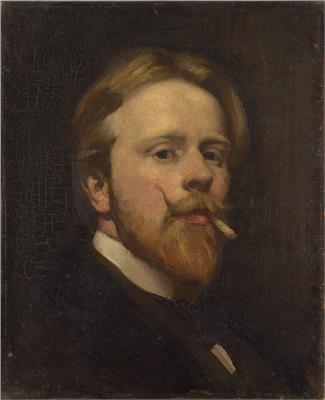 George Washington Thomas Lambert ARA (13 September 1873 – 29 May 1930) was an Australian artist, known principally for portrait painting and as a war artist during the First World War.

Lambert was born in St Petersburg, Russia, the posthumous son of George Washington Lambert (1833 – 25 July 1873, in London) of Baltimore, Maryland. The younger Lambert's mother was Annie Matilda, née Firth, an Englishwoman. Mother and son soon moved to Württemberg, Germany, to be with Lambert's maternal grandfather. Lambert was educated at Kingston College, Yeovil, Somerset. The family, consisting of Lambert, his mother and three sisters, decided to emigrate to Australia. They arrived in Sydney aboard the Bengal on 20 January 1887.

Lambert began exhibiting his pictures at the Art Society and the Society of Artists, Sydney in 1894. Lambert began contributing pen-and-ink cartoons for The Bulletin in 1895 and began painting full-time in 1896. Three illustrations by Lambert formed part of the bush ballads of the Fair girls and grey horses anthology of Scottish-Australian poet Will H. Ogilvie (1869–1963). In 1899 he won the Wynne Prize with Across the Blacksoil Plains. He studied at Julian Ashton's art school in Sydney until 1900. Later, he won a travelling scholarship for 150 pounds from the government of New South Wales. He spent a year in Paris before moving to London where he exhibited at the Royal Academy. Lambert was awarded a silver medal at an international exhibition for his painting The Sonnet in Barcelona in 1911. He was most known during this time as a portrait artist.

Lambert became an official Australian war artist in 1917 during the First World War. His painting Anzac, the landing 1915 of the landings on the Gallipoli peninsula in Turkey, is the largest painting at the Australian War Memorial collection. Lambert, as an honorary captain, travelled to Gallipoli in 1919 to make sketches for the painting. Another noted work was A sergeant of the Light Horse (1920), painted in London after his travels in Palestine.

During the war years, George Lambert spent much time in London, where it is suggested he was romantically involved with fellow artist Thea Proctor.

Lambert returned to Australia in 1921, where he had success in Melbourne with a one man show at Fine Art Society gallery. He was elected an associate of the Royal Academy in 1922. He often visited the homestead of Colonel Granville Ryrie of the Australian Light Horse at Michelago, New South Wales and there painted The Squatter's Daughter and Michelago Landscape. In 1927 he won the Archibald Prize, Australia's most prestigious art prize for portraiture, with his work titled Mrs Murdoch. In November 1927 he was commissioned to create a statue of writer Henry Lawson; the work depicting Lawson in rough clothes accompanied by a swagman, a dog and a fence post was unveiled in The Domain, Sydney on 28 July 1931 by the Governor of New South Wales, Sir Philip Game.

Lambert died on 29 May 1930 at Cobbitty, near Camden, New South Wales, and is buried in the Anglican section of South Head Cemetery.