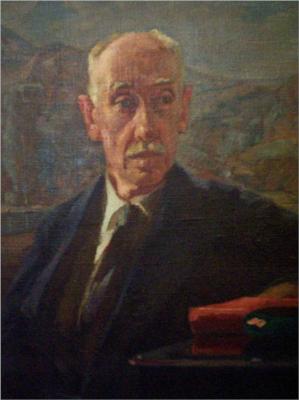 Konstantin Bogaevsky was born in the Eastern Crimean city of Feodosia to an old Italian-German family of the Genoese extraction on 24 January [O.S. 12 January] 1872. He took first lessons in art from Ivan Aivazovsky.

In 1891-1897 he studied at the Imperial Academy of Arts in the class of Arkhip Kuindzhi. The art of young Konstantin was not popular with the Academy and he was even at some stage temporarily discharged from the Academy for "lack of talent". Despite this, Kuindzhi always had a high respect for his pupil and protected him. In 1898 Konstantin traveled to Italy and France where he became acquainted with works of Claude Lorrain, whom he proclaimed as his true teacher. His first exhibition was in Moscow in 1898.

Since 1900 Bogaevsky works in Feodosia. The main theme of his works became the symbolist landscapes of a non-existent land (known to his friends as Bogaevia) that he saw only in his dreams. Konstantin Bogaevsky became a popular painter after Maximilian Voloshin published a series of essays titled Konstantin Bogaevsky. Voloshin highly praised the symbolism of Bogaevsky's paintings. Contemporaries often drew parallel between Bogaevsky and Nicholas Roerich.

Bogaevsky was member of Mir iskusstva, Union of Russian Artists and the Zhar-Tsvet. In 1906 he exhibited his paintings on Exposition de l'Art Russe organized by Sergei Diaghilev. In 1911 he visited Italy and discovered for himself the paintings of Andrea Mantegna, they were to strongly influence Bogaevsky's own later work.

Bogaevsky returned in 1912 to Feodosia where he was to remain for the rest of his life. He maintained a friendship of many years with another famous Feodosian and a bard of a non-existent land Alexander Grin, as well as with the Koktebel group of Russian Intelligentsia including Maximilian Voloshin, Marina Tsvetaeva, Osip Mandelstam.

After the October Revolution Bogaevsky retreated into relative obscurity, although works such as the 1932 Port of an Imaginable City were highly regarded as art in the school of Socialist Realism painting of the DnieproGES.

He died at Feodosia on 17 February 1943. A minor planet 3839 Bogaevskij, discovered by Soviet astronomer Nikolai Stepanovich Chernykh in 1971 is named after him.