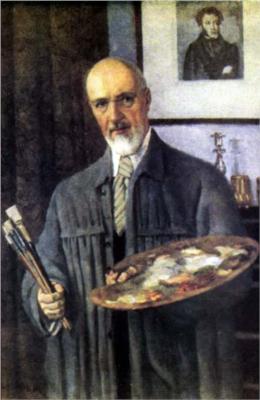 Konstantin Fyodorovich Yuon or Juon (Russian: Константи́н Фёдорович Юо́н; October 24 [O.S. October 12] 1875 – April 11, 1958) was a noted Russian painter and theatre designer associated with the Mir Iskusstva. Later, he co-founded the Union of Russian Artists and the Association of Artists of Revolutionary Russia.

Yuon was born in Moscow to the family of a banking clerk of Swiss-Russian origin (the surname Juon being of Walser origin). His brother Paul Juon was a notable composer.

From 1892 to 1898 he studied at the Moscow School of Painting, Sculpture and Architecture where Konstantin Savitsky and Konstantin Korovin were among his distinguished teachers. After graduating from the Moscow Art School he took private lessons from Valentin Serov (1898–1900). During several trips to Western Europe, particularly in Paris, he became acquainted with the cityscapes of Camille Pissarro and other Impressionists, but retained his own distinctive style.

In 1900 he opened the first private painting and drawing school in Moscow. Some noted Russian painters received art education in the school (for example, Olga Zhekulina). Later he taught in Leningrad Academy of Arts and the Surikov Art Institute in Moscow. His studio in Moscow was widely used by other painters. He designed sets for plays at the Moscow Art Theatre and the Maly Theater, becoming the official designer for this theater from 1945 to 1947. He also contributed sets for operas.

Konstantin Yuon started as an Impressionist landscape and genre painter with a Symbolist note. Among the impressionist landscapes are To the Trinity (1903) and Tverskoy Boulevard (1909). Later he toyed with the ideas of lyrical landscape mixed with the imitations of Palekh miniature and Icon arts. The most Symbolist of his works are the cycle of engravings Creation of the World on the theme of Genesis (1908–1912) and the painting New Planet that shows the October Revolution as the result of a cosmic catastrophe. To the end of his life he became a strict socialist realism artist, producing paintings like Parade on the Red Square on November 7, 1941.