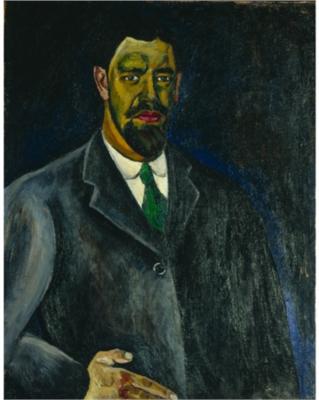 Pyotr Konchalovsky was born in the village of Slavianka, Kharkov gubernia (currently Ukraine) on 21 February 1876. His father was an art publisher. In 1889, the Konchalovskys moved to Moscow and their house became a part of the Moscow art scene of the 1890s. Their house was often visited by Valentin Serov, Mikhail Vrubel, Vasily Surikov. Later, Pyotr married a daughter of Vasily Surikov, who always praised the art of his son-in-law.

During his gymnasium years Konchalovsky attended classes of Moscow School of Painting, Sculpture and Architecture. In 1896-1898 he traveled to Paris and studied at the Académie Julian. In 1899, he returned to Russia and entered the Imperial Academy of Arts in Saint Petersburg, graduating in 1907. At the Academy, he studied under Savinsky, Zaleman and Kovalevsky.

Since 1909, he exhibited frequently, participating in the Golden Fleece, Fraternity, Mir Iskusstva, and New Society of Artists. He was a founding member of the society Jack of Diamonds in 1909. Beginning in 1918 he taught art. In 1922, he had his first solo exhibition at the Tretyakov Gallery.

During that period, he mostly drew still lifes and landscapes. His paintings—as of all other Jacks of Diamond—were strongly influenced by Paul Cézanne. Later he started to paint portraits (often Ceremonial Portraits) that were considered as the examples of Socialist Realism style.

Pyotr Konchalovsky was a very prolific painter, and is known to have created more than five thousand works.

Many of his descendants were people in the world of art. His son Mikhail Petrovich Konchalovsky (b. 1906) was a notable painter. His daughter Natalia Konchalovskaya (1903–1988) was a notable children's writer and her husband Sergei Mikhalkov was a notable poet, the author of children's poetry and two versions of the National Anthem of the Soviet Union and the present National Anthem of Russia. They have two sons: Andrei Konchalovsky is a film writer, director and a painter, whose son Egor is also a notable film director. Nikita Mikhalkov is also a movie director who won the 1994 Best Foreign Language Film Oscar for Burnt by the Sun.