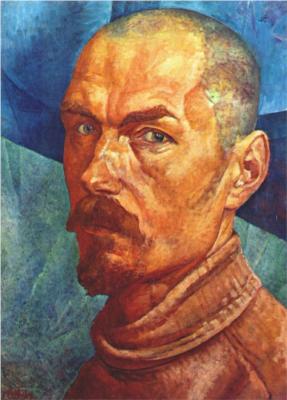 Kuzma Petrov-Vodkin was a Russian, later Soviet, painter and writer. He was first exposed to art as a child, when he took a few lessons from a local sign maker and icon painter. After secondary school, however, he wanted to join a railroad college, abandoning the artist life. He failed the entrance exams to the college, however, and instead began “Art Classes of Fedor Burov,” in his late teens. After the death of Burov two years later, Petrov-Vodkin took odd jobs painting in the city. Through his jobs and with his mother’s help, he was able to get an invitation to study in St. Petersburg, from 1895 to 1897. In art school, he later moved to Moscow and then Munich, graduating in1904.

After contracting pulmonary tuberculosis in 1927, Petrov-Vodkin was forced to quit painting. He thusly turned to writing, completing a number of works, including three semi-autobiographical novels, the first two of which are considered some of the finest Russian literature of the time. The soviet government, which was a supporter of Petrov-Vodkin’s works, disallowed the organization of any but state authorized artistic groups in 1932. One of these state supported groups was the Leningrad Union of Artists, of which Petrov-Vodkin was elected the first president in 1932.

Petrov-Vodkin’s works were largely ignored after his death of tuberculosis, until the mid-1960’s when there came a renewed interest in both his artistic and literary works. His three self-illustrated and semi-autobiographical books were republished in the 1970’s and much acclaimed.

Kuzma Petrov-Vodkin was born in Khvalynsk (Saratov Oblast) into the family of a local shoemaker. His first exposure to art was in his early childhood, when he took some lessons from a couple of icon painters and a signmaker. Still, Petrov-Vodkin didn't quite see himself in art at that time; after graduating from middle school, he took a summer job at a small shipyard with plans to get into railroad college in Samara. After failing his exam, he turned to "Art Classes of Fedor Burov" in 1896

In April 1895, Burov died and for some time Petrov-Vodkin took different painting jobs in the vicinity of Saratov. By chance, his mother's employer invited a well-known architect, R. Meltzer. Petrov-Vodkin was introduced to the guest and impressed him enough to get an invitation to study art at Saint Petersburg. The education was financed by a charitable subscription among local merchants. He also met at this time Borisov-Musatov, an important painter resident in Saratov, who encouraged Petrov-Vodkin to continue his studies.

Petrov-Vodkin stayed in Saint Petersburg from 1895 to 1897 studying at the Baron Stieglits School, before moving to the Moscow School of Painting, Sculpture and Architecture. There Petrov-Vodkin was a student of Valentin Serov, Isaak Levitan and especially Konstantin Korovin. In 1901 he travelled to Munich to take classes with Anton Ažbe.

While in Paris in 1906 he met and married Maria Jovanovic (1885–1960), a daughter of Serbian immigrant hotel-keepers. She remained his lifelong companion. They had two daughters, one of whom died [unverified] in childhood.

Even during his college years, Petrov-Vodkin managed to enter into conflict with the Russian Orthodox Church, which discarded his work on a chapel in Samara and ultimately destroyed it as unacceptable. A number of his early works were deemed too erotic. His first well-known work was The Dream (1910), which sparked a discussion among contemporary Russian artists. The main defender of the painting was Alexandre Benois; his main detractor was Ilya Repin (hence, Petrov-Vodkin was discussed by two of the major Russian painters of the time). Other major works of that time include Boys at play, and, notably, Bathing of a Red Horse, (1912) his most iconic work - a symbol of the coming social changes. The latter became an instant classic, and, in a sense, trademark for the artist.

From 1924 to 1926 Petrov-Vodkin lived in France with his family. In 1922 he painted a portrait of the Russian poet Anna Akhmatova.

During his earlier years, Petrov-Vodkin developed his "spherical perspective": a unique twist that distorted the drawing as to represent the viewer high enough to actually notice the spherical curve of the globe.

He used it extensively through his works like Death of a Commissar and In the Line of Fire, which make the observer seem more distant, but actually close. It is argued that this twist has been built upon Byzantine perspective - an inverted perspective used in iconography.