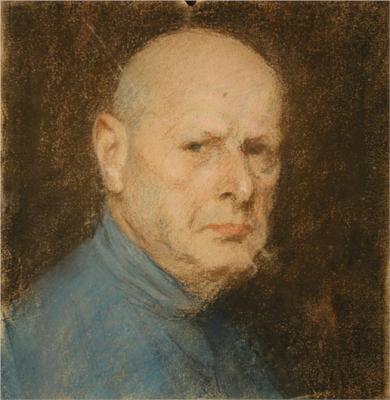 Grigoriy Aleksandrovich Goldstein was born on December 28th, 1878 in Odessa where he studied painting in the Odessa Art School. In 1902, after his marriage to Valeria Hmelnitskaya, the young family goes to Rome where Goldstein continues his art education in private studios, creating the first considerable works. In them he acts as artist symbolist.

After short-term visit to Russia in 1907, he comes back abroad again where travels to Italy, France, Switzerland, Spain. The majority of time he lives in Germany, in Munich that becomes the original capital of Jugendstil at the turn of the century. During this period Goldstein's works considerably change, opening the way for modernist painting, but, even working in the West European manner, he continues to find out the interest to the Russian plots and motives that pulls together Goldstein with masters of " World of art" with that difference that their works, generally were imitation of the European tradition, and Goldstein's painting is an original, Jugendstil's sample. Therefore modern comparison of Goldstein with famous names of Russian "World of art" causes confusion and question of experts – why had the artist of such level remained unknown in the homeland for many years?

Goldstein comes back to Russia in 1917. The ideas of vanguard dominating in native art are alien to him, all relations are lost. Goldstein works only for himself. During the 20-s and 30-s he paints penetrated with isolation and lyricism portraits of his family, sketches of northern nature. Grigoriy Aleksandrovich died on May 5th, 1938 in Leningrad.

The name of Grigoriy Goldstein has been removed from history for long decades. Only in the late 90-s due to happy set of circumstances and mysterious events, the artist and his creativity come back thanks to the efforts of St. Petersburg collector Dmitry Nefedov, the owner of the main heritage of the author. He managed not only to save the works of the artist from destruction and oblivion, but also to restore them, to organize a series of the most interesting exhibitions in St. Petersburg and Moscow which attracted attention of art lovers to Goldstein. It is enough to see his works just once and you immediately get under charm of the painting, penetrated by light of "other worlds", high culture and love to the world.