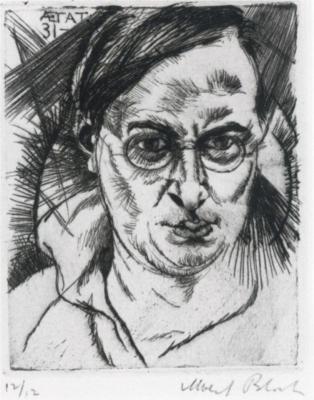 Albert Bloch (August 2, 1882 – March 23, 1961) was an American Modernist artist and the only American artist associated with Der Blaue Reiter (The Blue Rider), a group of early 20th-century European modernists.

Bloch was born in St. Louis, Missouri. He first studied art at the St. Louis School of Fine Arts. In 1901–03 he produced comic strips and cartoons for the St. Louis Star newspaper. Between 1905 and 1908 he worked as a caricaturist and illustrator for William Marion Reedy's literary and political weekly The Mirror.

From 1909 to 1921, Bloch lived and worked mainly in Germany, where he was associated with Der Blaue Reiter.

After the end of World War I, Bloch returned to the United States, teaching at the School of the Art Institute of Chicago for a year, and then accepting a Departmental Head position at the University of Kansas until his retirement in 1947.