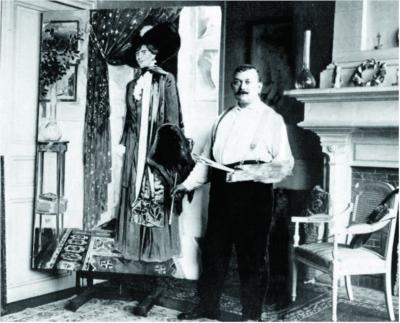 Konstantinos Parthenis represents the heroic phase of Greek modernism, which managed to break with the artistic establishment of Munich.
The cosmopolitan background of this Alexandrian painter (Italy, Vienna, Paris) may well account for his idiosyncratic eclecticism. Nevertheless
he succeeded in incorporating these various influences into his own unparalleled style marked by idealism, a certain “musicality” and rhythm, and the
spiritual sublimation of his pictorial matter. His paintings executed in Vienna and in Greece during his first sojourn (1903-1907) reveal his strong attraction towards the Sezession, the Viennese version of Symbolism and Art Nouveau, and particularly Gustav Klimt: the development of the surface composition,
the high horizon without a sky, the decorative schematization, the pointillisme, and the cold colours dominate these pictures. After his contact with Parisian avant-garde (1909-1911) and his return to Greece, Parthenis interpreted the Greek light through brighter colours, influenced by post impressionist painters and the fauves. The French symbolists, both the older, like Puvis de Chavannes, and the younger, like the Nabis, and in particular Maurice Denis, appear to have marked not only the morphology, but also the thematic choices of his work, as shown in the religious compositions and the idealistic allegories, which are prominent in the artist’s creations of the thirties.

The Byzantine hagiographers and Domenicos Theotokopoulos (El Greco) may now be added to Parthenis’ masters, within the ideological horizon of the Generation of the Thirties. In his works of this period we can trace the impact of Cubism. Parthenis’ mature paintings present us with an ideal vision of
Greece, its myths and history; in this the Olympian deities, the Byzantine saints and the heroes of the Greek War of Independence live together in harmony.
His ideal figures are suspended in a type of transcendental space where time has been abolished and the remains of the visible world have turned into
platonic archetypes, with the help of an impalpable technique. The pigments have lost their material quality, turning into a purely spiritual projection.
Parthenis’ mature works recall supernatural acts featuring divine epiphanies.

Konstantinos Parthenis (Greek: Κωνσταντίνος Παρθένης; 10 May 1878 – 25 July 1967) was a distinguished Greek painter, born in Alexandria. Parthenis broke with the Greek academic tradition of the 19th century and introduced modern elements together with traditional themes, like the figure of Christ, in his art.

Konstantinos Parthenis was born to an Italian mother and a Greek father in Alexandria. After a brief period of study in Italy, he studied from 1895 to 1903 at the Academy of Fine Arts Vienna under Karl Wilhelm Diefenbach. Parthenis belonged to the artistic group "Humanitas" that was founded in 1897 by Diefenbach on the "Himmelhof" in Ober Sankt Veit, and became the nucleus of the early alternative movement or life reform. Parthenis also took music lessons at the same time at the Vienna Conservatory. His first solo exhibition was in Boehm Künstlerhaus in 1899. After his studies in Vienna, he moved to Paris in 1903, and then he lived in Greece, where he worked as an icon painter. In 1907, he painted out the George's Church in Vienna. he was active as an icon painter of deep religiosity but also characterized by a fraction to traditional icon painting. After his participation in the Venice Biennale in 1938, the Italian government acquired one of his works.