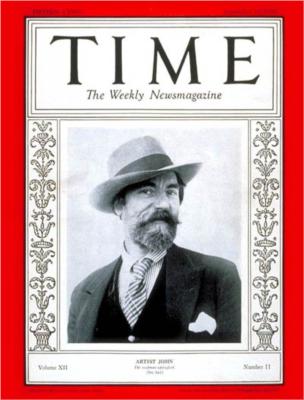 Augustus Edwin John OM RA (4 January 1878 – 31 October 1961) was a Welsh painter, draughtsman, and etcher. For a short time around 1910, he was an important exponent of Post-Impressionism in the United Kingdom. He was the brother of the painter Gwen John.

"Augustus was celebrated first for his brilliant figure drawings, and then for a new technique of oil sketching. His work was favourably compared in London with that of Gauguin and Matisse. He then developed a style of portraiture that was imaginative and often extravagant, catching an instantaneous attitude in his subjects."

John was born at Tenby in Pembrokeshire, the younger son and third of four children in his family. His father was Edwin William John, a Welsh solicitor; his mother, Augusta Smith from a long line of Sussex master plumbers, died young when he was six, but not before inculcating a love of drawing in both Augustus and his older sister Gwen. At the age of seventeen he briefly attended the Tenby School of Art, then left Wales for London, studying at the Slade School of Art UCL in London (his sister, Gwen John, was with him at the Slade and became an important artist in her own right), where he became the star pupil of drawing teacher Henry Tonks, and even before his graduation was recognised as the most talented draughtsman of his generation.

In the summer of 1897, John suffered a serious head injury when he hit submerged rocks diving into the sea at Tenby, and the lengthy convalescence that followed seems to have actually stimulated his adventurous spirit and accelerated his artistic growth. In 1898, he won the Slade Prize with Moses and the Brazen Serpent. John afterward studied independently in Paris where he seems to have been influenced by Puvis de Chavannes.

The need to support Ida Nettleship (1877–1907), whom he married in 1901, led him to accept a post teaching art at the University of Liverpool.

Augustus John and his student James Dickson Innes spent two years painting in the Arenig valley around 1910, especially the mountain Arenig Fawr. In 2011 this period was made the subject of a BBC documentary titled The Mountain That Had to Be Painted.

Some time in 1910, John fell in love with the town of Martigues, in Provence, located halfway between Arles and Marseilles, and first seen from a train en route to Italy. John wrote that Provence "had been for years the goal of my dreams" and Martigues was the town for which he felt the greatest affection. "With a feeling that I was going to find what I was seeking, an anchorage at last, I returned from Marseilles, and, changing at Pas des Lanciers, took the little railway which leads to Martigues. On arriving my premonition proved correct: there was no need to seek further." The connection with Provence continued until 1928, by which time John felt the town had lost its simple charm, and he sold his home there.