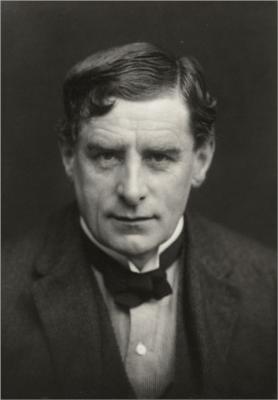 Walter Richard Sickert (31 May 1860 – 22 January 1942) was an English painter and printmaker who was a member of the Camden Town Group in London. He was an important influence on distinctively British styles of avant-garde art in the 20th century.

Sickert was a cosmopolitan and eccentric who often favoured ordinary people and urban scenes as his subjects. His work also included portraits of well-known personalities and images derived from press photographs. He is considered a prominent figure in the transition from Impressionism to Modernism.

Sickert was born in Munich, Germany on 31 May 1860, the eldest son of Oswald Sickert, a Danish-German artist, and his wife, Eleanor Louisa Henry, who was an illegitimate daughter of the British astronomer Richard Sheepshanks. In 1868, following the German annexation of Schleswig-Holstein, the family settled in Britain, where Oswald's work had been recommended by Freiherrin Rebecca von Kreusser to Ralph Nicholson Wornum, who was Keeper of the National Gallery at the time. The family obtained British nationality. The young Sickert was sent to University College School from 1870 to 1871, before transferring to King's College School, where he studied until the age of 18. Though he was the son and grandson of painters, he first sought a career as an actor; he appeared in small parts in Sir Henry Irving's company, before taking up the study of art in 1881. After less than a year's attendance at the Slade School, Sickert left to become a pupil and etching assistant to James Abbott McNeill Whistler. Sickert's earliest paintings were small tonal studies painted alla prima from nature after Whistler's example.

In 1883, he travelled to Paris and met Edgar Degas, whose use of pictorial space and emphasis on drawing would have a powerful effect on Sickert's work. He developed a personal version of Impressionism, favouring sombre colouration. Following Degas' advice, Sickert painted in the studio, working from drawings and memory as an escape from "the tyranny of nature". In 1888 Sickert joined the New English Art Club, a group of French-influenced realist artists. Sickert's first major works, dating from the late 1880s, were portrayals of scenes in London music halls. One of the two paintings he exhibited at the NEAC in April 1888, Katie Lawrence at Gatti's, which portrayed a well known music hall singer of the era, incited controversy "more heated than any other surrounding an English painting in the late 19th century". Sickert's rendering was denounced as ugly and vulgar, and his choice of subject matter was deplored as too tawdry for art, as female performers were popularly viewed as morally akin to prostitutes. The painting announced what would be Sickert's recurring interest in sexually provocative themes.

In the late 1880s, Sickert spent much of his time in France, especially in Dieppe, which he first visited in mid-1885, and where his mistress, and possibly his illegitimate son, lived. During this period Sickert began writing art criticism for various publications. Between 1894 and 1904 Sickert made a series of visits to Venice, initially focusing on the city's topography; it was during his last painting trip in 1903–04 that, forced indoors by inclement weather, he developed a distinctive approach to the multiple figure tableau that he further explored on his return to Britain. The models for many of the Venetian paintings are believed to have been prostitutes, with whom Sickert may have had sex.