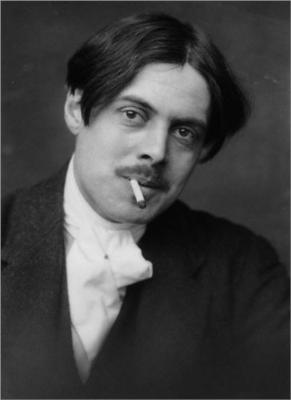 Percy Wyndham Lewis (18 November 1882 – 7 March 1957) was an English writer, painter and critic (he dropped the name "Percy", which he disliked). He was a co-founder of the Vorticist movement in art, and edited the literary magazine of the Vorticists, BLAST. His novels include his pre-World War I-era novel Tarr (set in Paris), and The Human Age, a trilogy comprising The Childermass (1928), Monstre Gai and Malign Fiesta (both 1955), set in the afterworld. A fourth volume of The Human Age, The Trial of Man, was begun by Lewis but left in a fragmentary state at the time of his death. He also wrote two autobiographical volumes, Blasting and Bombardiering (1937) and Rude Assignment: A Narrative of my Career Up-to-Date (1950).

Lewis was reputedly born on his father's yacht off the Canadian province of Nova Scotia. His British mother and American father separated about 1893. His mother subsequently returned to England, where Lewis was educated, first at Rugby School, and then at the Slade School of Art, University College, London, before spending most of the 1900s travelling around Europe and studying art in Paris.

Mainly residing in London from 1908, Lewis published his first work (accounts of his travels in Brittany) in Ford Madox Ford's The English Review in 1909. He was a founder-member of the Camden Town Group in 1911. In 1912 he exhibited his Cubo-Futurist illustrations to Timon of Athens (later issued as a portfolio, the proposed edition of Shakespeare's play never materialising) and three major oil paintings at the second Post-Impressionist exhibition. This brought him into close contact with the Bloomsbury Group, particularly Roger Fry and Clive Bell, with whom he soon fell out. In 1912 he was commissioned to produce a decorative mural, a drop curtain, and more designs for The Cave of the Golden Calf, an avant-garde cabaret and nightclub on London's Heddon Street.

It was in the years 1913–15 that he developed the style of geometric abstraction for which he is best known today, a style which his friend Ezra Pound dubbed "Vorticism." Lewis found the strong structure of Cubist painting appealing, but said it did not seem "alive" compared to Futurist art, which, conversely, lacked structure. Vorticism combined the two movements in a strikingly dramatic critique of modernity. In his early visual works, particularly versions of village life in Brittany showing dancers (ca. 1910–12), Lewis may have been influenced by the process philosophy of Henri Bergson, whose lectures he attended in Paris. Though he was later savagely critical of Bergson, he admitted in a letter to Theodore Weiss (19 April 1949) that he "began by embracing his evolutionary system." Nietzsche was an equally important influence.

After a brief tenure at the Omega Workshops, Lewis quarrelled with the founder, Roger Fry, over a commission to provide wall decorations for the Daily Mail Ideal Home Exhibition, which Lewis believed Fry had misappropriated. He walked out with several Omega artists to start a competing workshop called the Rebel Art Centre. The Centre operated for only four months, but it gave birth to the Vorticist group and the publication, BLAST. In BLAST Lewis wrote the group's manifesto, several essays expounding his Vorticist aesthetic (distinguishing it from other avant-garde practices), and a modernist drama, "Enemy of the Stars". The magazine also included reproductions of now lost Vorticist works by Lewis and others.