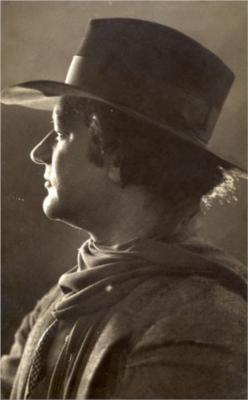 Sir Jacob Epstein KBE (10 November 1880 – 19 August 1959) was an American British sculptor who helped pioneer modern sculpture. He was born in the United States, and moved to Europe in 1902, becoming a British subject in 1911. He often produced controversial works which challenged ideas on what was appropriate subject matter for public artworks. He also made paintings and drawings, and often exhibited his work.

Epstein's parents were Polish Jewish refugees, living on New York's Lower East Side. His family was middle-class, and he was the third of five children. His interest in drawing came from long periods of illness; as a child he suffered from pleurisy.

He studied art in his native New York as a teenager, sketching the city, and joined the Art Students League of New York in 1900. For his livelihood, he worked in a bronze foundry by day, studying drawing and sculptural modelling at night. Epstein's first major commission was to illustrate Hutchins Hapgood's 1902 book Spirit of the Ghetto. Epstein used the money from the commission to move to Paris.

Moving to Europe in 1902, he studied in Paris at the Académie Julian and the École des Beaux-Arts. He settled in London in 1905 and married Margaret Dunlop in 1906. Epstein became a British subject on 4 January 1911. Many of Epstein's works were sculpted at his two cottages in Loughton, Essex, where he lived first at number 49 then 50, Baldwin's Hill (there is a blue plaque on number 50). He served briefly in the 38th Battalion of the Royal Fusiliers, known as the Jewish Legion during World War I; following a breakdown, he was discharged in 1918 without having left England.

In London, Epstein involved himself with a bohemian and artistic crowd. Revolting against ornate, pretty art, he made bold, often harsh and massive forms of bronze or stone. His sculpture is distinguished by its vigorous rough-hewn realism. Avant-garde in concept and style, his works often shocked his audience. This was not only a result of their (often explicit) sexual content, but also because they deliberately abandoned the conventions of classical Greek sculpture favoured by European Academic sculptors to experiment instead with the aesthetics of art traditions as diverse as those of India, West Africa, and the Pacific Islands. People in Liverpool, however, nicknamed his nude male sculpture over the door of Lewis's department store "Dickie Lewis". Such factors may have focused disproportionate attention on certain aspects of Epstein's long and productive career, throughout which he aroused hostility, especially challenging taboos surrounding the depiction of sexuality.

London was not ready for Epstein's first major commission – 18 large nude sculptures made in 1908 for the façade of Charles Holden's building for the British Medical Association on The Strand (now Zimbabwe House) were initially considered shocking to Edwardian sensibilities, again mainly due to the perception that they were sexually over-explicit. In art-historical terms, however, the Strand sculptures were controversial for quite a different reason: they represented Epstein's first thoroughgoing attempt to break away from traditional European iconography in favour of elements derived from an alternative sculptural milieu – that of classical India. The female figures in particular may be seen deliberately to incorporate the posture and hand gestures of Buddhist, Jain and Hindu art from the subcontinent in no uncertain terms. The current, mutilated condition of many of the sculptures is also not entirely connected with prudish censorship; the damage was caused in the 1930s when possibly dangerous projecting features were hacked off after pieces fell from one of the statues.