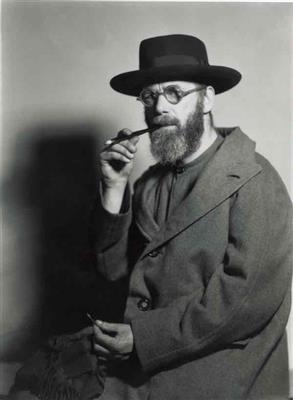 Gill was named Royal Designer for Industry, the highest British award for designers, by the Royal Society of Arts. He also became a founder-member of the newly established Faculty of Royal Designers for Industry.

Gill was born in 1882 in Hamilton Road, Brighton and grew up in the Brighton suburb of Preston Park. One of twelve children, he was the elder brother of MacDonald "Max" Gill (1884–1947), the graphic artist. In 1897 the family moved to Chichester. He studied at Chichester Technical and Art School, and in 1900 moved to London to train as an architect with the practice of W.D. Caroe, specialists in ecclesiastical architecture.

Frustrated with his training, he took evening classes in stonemasonry at the Westminster Technical Institute and in calligraphy at the Central School of Arts and Crafts, where Edward Johnston, creator of the London Underground typeface, became a strong influence. In 1903 he gave up his architectural training to become a calligrapher, letter-cutter and monumental mason.

Working from Ditchling in Sussex, where he lived with his wife, in 1910 Gill began direct carving of stone figures. These included Madonna and Child (1910), which English painter and art critic Roger Fry described in 1911 as a depiction of "pathetic animalism", and Ecstasy (1911). Such semi-abstract sculptures showed Gill's appreciation of medieval ecclesiastical statuary, Egyptian, Greek and Indian sculpture, as well as the Post-Impressionism of Cézanne, van Gogh and Gauguin.

His first public success was Mother and Child (1912). A self-described "disciple" of the Ceylonese philosopher and art historian Ananda Coomaraswamy, Gill was fascinated during this period by Indian temple sculpture. Along with his friend and collaborator Jacob Epstein, Gill planned the construction in the Sussex countryside of a colossal, hand-carved monument in imitation of the large-scale Jain structures at Gwalior Fort in Madhya Pradesh, to which he had been introduced by William Rothenstein.

In 1914 Gill produced sculptures for the stations of the cross in Westminster Cathedral. In the same year he met the typographer Stanley Morison. After the war, together with Hilary Pepler and Desmond Chute, Gill founded The Guild of St Joseph and St Dominic at Ditchling. There his pupils included David Jones, who soon began a relationship with Gill's daughter, Petra.

Gill designed several war memorials after the First World War, including the Grade II* listed Trumpington War Memorial. Commissioned to produce a war memorial for the University of Leeds, Gill produced a frieze depicting Jesus driving the money-changers from the temple, showing contemporary Leeds merchants as the money-changers. Gill contended that the "money men" were a key cause of the war. This is at the Michael Sadler Building at the University.

In 1924, Gill moved to Capel-y-ffin in Powys, Wales, where he established a new workshop, to be followed by Jones and other disciples. In 1928, he set up a printing press and lettering workshop in Speen, Buckinghamshire. He took on a number of apprentices, including David Kindersley, who in turn became a successful sculptor and engraver, and his nephew, John Skelton, noted as an important letterer and sculptor. Other apprentices included Laurie Cribb, Donald Potter and Walter Ritchie. Others in the household included Gill's two sons-in-law, Petra's husband Denis Tegetmeier and Joanna's husband Rene Hague.