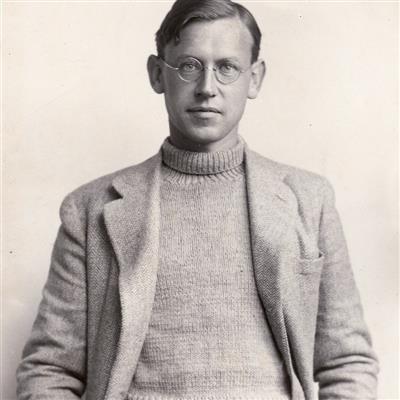 
Richard Ernst Eurich, OBE, RA (14 March 1903 – 6 June 1992) was an English painter who worked as a war artist to the Admiralty in the Second World War and was also known for his panoramic seascapes and narrative paintings. These were often invested with a sense of mystery and wonder which have tended to set him apart from mainstream development of art in the twentieth century.


Richard Eurich was born in Bradford. He was the second of five children born to Dr Friederich Wilhelm Eurich, a professor of forensic medicine and a bacteriologist known for his research into the disease anthrax.
Richard was sent to St George's School, Harpenden at the age of ten and then attended Bradford Grammar School from 1918 till 1921. He then studied at Bradford School for Arts and Crafts in 1922 and continued his training at the Slade School of Art under Professor Henry Tonks until 1926.


Whilst still a student, Eurich met Sir Edward Marsh a great patron of the arts. He took Eurich under his wing and together with Eric Gill was instrumental in arranging Eurich's first one-man show at the Goupil Gallery in 1929. This exhibition consisted entirely of painstaking pencil drawings. At the opening, Eurich met the artist Christopher Wood who advised him to "paint what you love and damn all fashions that come and go" which advice Eurich took to heart. Marsh also introduced Eurich's work to the Redfern Gallery, run by Rex Nan Kivell. Eurich had a show there in 1933 which was so successful that the Redfern offered him a contract to act as his London dealer. His association with the gallery lasted for twenty-five years and he had a further fifteen exhibitions there. Eurich spent the early part of the 1930s living in small fishing ports on the south coast of England and in 1934 he settled in Hythe, Hampshire. Hythe, and the nearby Southampton Water, became regular subjects of his paintings.


In June 1940 Eurich wrote to the War Artists' Advisory Committee, WAAC, suggesting the withdrawal from Dunkirk as a subject, as he had previously painted in the port at Dunkirk. Although WAAC had already commissioned a large painting from Charles Cundall on the withdrawal, they agreed to Eurich's suggestion. His panoramic painting of the Dunkirk beaches made his name overnight when it was shown at the National Gallery in August 1940, alongside Cundall's treatment of the same subject.


After completing his Dunkirk painting and a number of other short-term commissions for WAAC, Eurich was given a full-time commission to paint Admiralty subjects. This commission lasted from 1941 to 1945 during which time he painted, sometimes, epic reconstructions of battle scenes, depictions of survival stories and also simpler paintings of ships and boats. Some of these works were based on locations and vessels Eurich was familiar with, such as his paintings of British fishing boats and of naval actions off the south coast of England. To ensure accuracy, Eurich made several trips on destroyers patrolling the Straits of Dover during the war. Other paintings were based on photographs and eyewitness accounts and some were wholly works of imagination. This last category included Survivors From a Torpedoed Ship showing exhausted men clinging to the upturned hull of their lifeboat. Although the painting was greatly praised, by Winston Churchill among others, WAAC quickly withdrew it from public display fearing it would adversely affect recruitment to the Merchant Navy. Eurich painted reconstructions of British Commando raids on Vaagso, Bruneval and Dieppe. For the Dieppe raid, Eurich was given access to the operations room for the attack and listened to the British radio communications as events developed. During the war, Eurich also painted scenes representing the D-Day landings, the Battle of Salerno, the wreck of the Tirpitz and air attacks on a convoy. In total during the war, Eurich completed some 34 oil paintings and one drawing for WAAC.