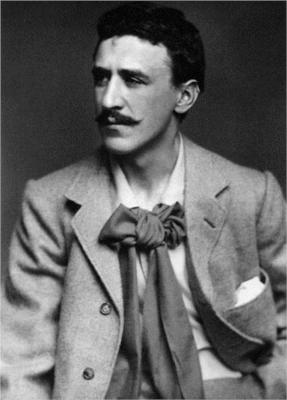 Charles Rennie Mackintosh (7 June 1868 – 10 December 1928) was a Scottish architect, designer, water colourist and artist. His artistic approach had much in common with European Symbolism. His work, alongside that of his wife Margaret Macdonald, was influential on European design movements such as Art Nouveau and Secessionism. He was born in Glasgow and died in London.

Charles Rennie Mackintosh was born at 70 Parson Street, Townhead, Glasgow, on 7 June 1868, the fourth of eleven children and second son of William McIntosh, a superintendent and chief clerk of the City of Glasgow Police, and his wife, Margaret Rennie. Mackintosh grew up in the Townhead and Dennistoun (Firpark Terrace) areas of Glasgow, and he attended Reid's Public School and the Allan Glen's Institution.

In 1890 Mackintosh was the second winner of the Alexander Thomson Travelling Studentship, set up for the "furtherance of the study of ancient classic architecture, with special reference to the principles illustrated in Mr. Thomson's works."

He changed the spelling of his name from 'McIntosh' to 'Mackintosh' for unknown reasons, as his father did before him, around 1893. Confusion continues to surround the use of his name with 'Rennie' sometimes incorrectly substituted for his first name of 'Charles'. The modern use of 'Rennie Mackintosh' as a surname is also incorrect and he was never known as such in his lifetime; 'Rennie' being a middle name which he used often in writing his name. Signatures took various forms including 'C.R. Mackintosh' and 'Chas. R. Mackintosh.'

Upon his return, he resumed work with the Honeyman & Keppie architectural practice where he started his first major architectural project, the Glasgow Herald Building (now known as The Lighthouse), in 1899. He was engaged to marry his employer's sister, Jessie Keppie.

Around 1892, Mackintosh met fellow artist Margaret Macdonald at the Glasgow School of Art. He and fellow student Herbert MacNair, also an apprentice at Honeyman and Keppie, were introduced to Margaret and her sister Frances MacDonald by the head of the Glasgow School of Art, Francis Henry Newbery, who saw similarities in their work. Margaret and Charles married on 22 August 1900. The couple had no children. MacNair and Frances also married the previous year. The group worked collaboratively and came to be known as "The Four", and were prominent figures in Glasgow Style art and design.

In 1904, after he had completed several successful building designs, Mackintosh became a partner in Honeyman & Keppie, and the company became Honeyman, Keppie & Mackintosh. When economic hardships were causing many architectural practices to close, in 1913, he resigned from the partnership and attempted to open his own practice.

Mackintosh lived most of his life in the city of Glasgow. Located on the banks of the River Clyde, during the Industrial Revolution, the city had one of the greatest production centres of heavy engineering and shipbuilding in the world. As the city grew and prospered, a faster response to the high demand for consumer goods and arts was necessary. Industrialized, mass-produced items started to gain popularity. Along with the Industrial Revolution, Asian style and emerging modernist ideas also influenced Mackintosh's designs. When the Japanese isolationist regime softened, they opened themselves to globalisation resulting in notable Japanese influence around the world. Glasgow's link with the eastern country became particularly close with shipyards building at the River Clyde being exposed to Japanese navy and training engineers. Japanese design became more accessible and gained great popularity. In fact, it became so popular and so incessantly appropriated and reproduced by Western artists, that the Western World's fascination and preoccupation with Japanese art gave rise to the new term, Japonism or Japonisme.