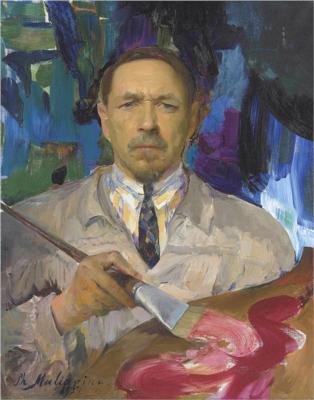 Filipp Andreevich Malyavin (Russian: Филипп Андреевич Малявин) (October 22, 1869, Kazanki (Julian calendar: October 10) – December 23, 1940, Nice, France) was a Russian painter and draftsman. Trained in icon-painting as well as having studied under the great Russian realist painter Ilya Repin, Malyavin is unusual among the Russian artists of the time for having a peasant background. It is possibly due to this that his paintings often depict peasant life, and his most famous work, Whirlwind, shows peasant women dancing.

Filipp Malyavin was born in the large village of Kazanki (Samara Province, now the Totsk District, Orenburg Region), into a poor peasant family with many children. Even as a child, he was drawn towards art, drawing and creating clay figurines of birds and animals from the age of five.

The village was visited by traveling monks, who would bring with them icons from Mount Athos, in Greece. Fascinated by the icons, Malyavin convinced his parents to allow him to go to Athos to study icon-painting. At the age of sixteen, he traveled to Greece with a monk from Athos, his journey financed by the villagers themselves.

Although the monasteries at Athos were famed for their vast collections of Greek manuscripts and books, the art of icon painting was not actually practiced there. Malyavin was disappointed to learn that they only made copies of Russian icons. Having used up his money and thus unable to return to Russia, Malyavin entered the monastery as a novice, and was charged with painting icons and murals.

This continued until 1891, when Malyavin met Vladimir Beklemishev, a Russian sculptor and professor at the Saint Petersburg Academy of Arts who was on a visit to Athos. Beklemishev was greatly impressed by Malyavin's work and invited him to Petersburg.

In March 1892, Malyavin arrived in St. Petersburg and, with Beklemishev's help, was enrolled in the Academy of Arts. Due to the Academy reforms of 1894, Malyavin was able to choose his own teacher after completing the Academy curriculum. His options included such great artists as Vladimir Makovsky and Arkhip Kuindzhi. However, Malyavin applied for, and was accepted into, the studio of Russian realist Ilya Repin, who among others, also taught Igor Grabar, Konstantin Somov, Anna Ostroumova-Lebedeva, and Boris Kustodiev.

It was here, in Repin's studio, that Malyavin began creating some of his most famous early works, including Peasant Girl Knitting a Stocking (1895), which is the first of his paintings in which he introduces his favorite color, red. Three of these early works, all depicting peasant women, were exhibited at the Moscow Art Lovers' Society Salon. Two of these were bought by Pavel Tretyakov for the Tretyakov Gallery.

Malyavin also began to perfect his style of portraiture, creating another series of paintings depicting his fellow-artists from Repin's studio. Among the best of these is that of Konstantin Somov, who would later found the World of Art group. Malyavin's fame spread quickly, and it was not long before society grandees such as Baroness Wolf and Mme. Popova began coming to him to have their portraits painted.