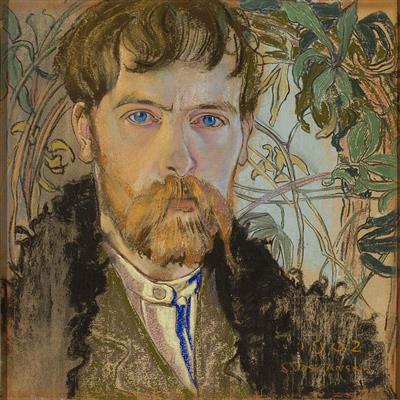 Stanisław Wyspiański (pronounced ['staˈɲiswaf vɨˈspjaɲskʲi]; 15 January 1869 – 28 November 1907) was a Polish playwright, painter and poet, as well as interior and furniture designer. A patriotic writer, he created a series of symbolic, national dramas within the artistic philosophy of the Young Poland Movement. Wyspiański was one of the most outstanding and multifaceted artists of his time in Poland under the foreign partitions. He successfully joined the trends of modernism with themes of the Polish folk tradition and Romantic history. Unofficially, he came to be known as the Fourth Polish Bard (in addition to the earlier Three Bards: Adam Mickiewicz, Juliusz Słowacki, and Zygmunt Krasiński).

Stanisław Wyspiański was born to Franciszek Wyspiański and Maria Rogowska. His father, a sculptor, owned an atelier on Wawel Hill. His mother died of tuberculosis in 1876 when Stanisław was seven years old. Due to problems with alcohol, Stanisław's father could not fulfil his parental responsibilities. Stanisław was adopted by his aunt Joanna Stankiewiczowa and her husband Kazimierz. The Stankiewicz family belonged to a bourgeois intellectual class. In their house, Wyspiański became acquainted with painter Jan Matejko, who was a frequent visitor. Matejko soon recognized that the boy had artistic talent and gave him his first artistic guidance. Wyspiański attended Saint Anne's Secondary. The school was unique for several reasons. Firstly, although the Polish language was forbidden in educational institutions under foreign rule, the lectures in Saint Anne's Gymnasium were delivered in Polish. Secondly, the teacher's goal was to equip the students with a thorough knowledge of Polish history and literature. Thirdly, graduates of the school, including Lucjan Rydel, Stanisław Estreicher and Henryk Opieński, were considered prominent figures in Kraków's cultural life. As a student, Wyspiański took particular interest in art and literature. According to Joanna Stankiewiczowa, a young Stanisław portrayed small cottages, animals, plants, armors and decorations. Wyspiański also created a dramatic interpretation of Matejko's painting Stefan Batory pod Pskowem (Bathory at Pskov).

In 1887 Wyspiański enrolled in the Philosophy Department at the Jagiellonian University and the School of Fine Arts in Kraków. While studying at the University, he attended lectures in art, history and literature. Jan Matejko, the dean of the School of Fine Arts soon recognized Wyspiański's talent and asked him to join in the creation of a polychrome inside the Mariacki Church.

The years 1890–1895 were devoted to traveling. Wyspiański visited Italy, Switzerland, Germany, Prague and France. His stay in France is regarded to have been a major point in his artistic life. He studied at the private Académie Colarossi. Since the school fee was very high, Wyspiański applied for a grant. During his stay in France he got acquainted with Paul Gauguin. Together they visited art museums, where Wyspiański was bewitched by the beauty of Pierre Puvis de Chavannes's paintings. He also attended theatre performances based on Shakespeare's and classical era plays. His future dramas: Daniel i Meleager (Daniel and Meleagra) and Powrót Odysa (Return of Odysseus) were based on the antic tradition. Meanwhile, he worked on several dramas Królowa Polskiej Korony (The Queen of Polish Crown), Warszawianka (Varsovian Anthem) and the first version of Legenda (Legend). The play Legenda (Legend) was based on the famous Polish legend about Wars and Sawa. In August 1894 he returned to Kraków, where he got involved in the modernist movement. It was then he designed and partially made a polychrome for the Franciscan Church that was composed of flowery, geometrical and heraldic motifs. Moreover, the prior of the church encouraged Wyspiański to design various stained glass windows such as Blessed Salomea, Saint Francis Stigmata and God the Father. It is worth mentioning that Wyspiański received an award from the Polish Academy of Learning for the landscape of the Kopiec Kościuszki (Kościuszko Mound). As a painter, interior designer and poet he cooperated with the Town Theatre in Kraków. First he designed furniture and scenography for the theatre performances, then he staged various dramas on the stage of the theatre.