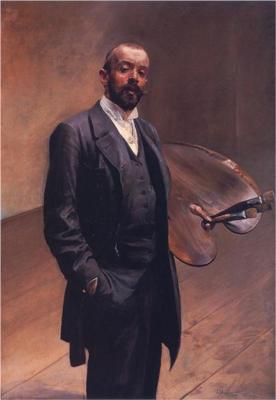 Self-portrait with a palette - Jacek Malczewski

Jacek Malczewski ( Polish pronunciation (help·info)) (15 July 1854 – 8 October 1929) is one of the most revered painters of Poland, associated with the patriotic Young Poland movement following the century of Partitions. He is regarded as the father of Polish Symbolism. In his creative output, Malczewski combined the predominant style of his times, with historical motifs of Polish martyrdom, the Romantic ideals of independence, Christian and Greek traditions, folk mythology, as well as his love of the natural environment.

Malczewski was born in Radom, part of Congress Poland controlled then by the Russian Empire. During his childhood and early teen years he was greatly influenced by his father Julian, a Polish patriot and social activist who introduced him to the world of Romantic literature inspired by the November Uprising. On his mother's side, he was related to the Szymanowski family whom they often visited on their country estate in Cygów. Similarly, the beauty of Polish landscape and folklore had been awakened in him by Feliks Karczewski, his uncle and long-time guardian who invited future novelist Adolf Dygasiński to his estate, for Jacek's cognitive benefit.

Malczewski moved to Kraków at age 17, and began his art education in 1872 under the watchful eye of Leon Piccard. He attended his first art classes in the workshop of Władysław Łuszczkiewicz at the School of Fine Arts. A year later, in 1873, reassessed by Jan Matejko himself, Malczewski formally enrolled in the School, and studied with Łuszczkiewicz, Feliks Szynalewski and Florian Cynk. In 1876 he went to Paris, France and studied for a year at the École des Beaux-Arts, in the studio of Henri Lehmann. He attended also the Académie Suisse.

Malczewski started his master studies with Jan Matejko already in 1875 before embarking on a trip to France, and completed them in 1879 after his return from abroad back to Partitioned Poland. In spite of considerable aesthetic differences between them, Malczewski was greatly influenced by Matejko's historical painting filled with neo-romantic metaphor and patriotic themes. In 1879, Malczewski completed a master course on composition under Matejko. He was equally impressed with the dramatic art of earlier Polish Romantic painter Artur Grottger. His painting revolved around a few carefully selected motifs, constantly retold and expanded into mythology filled with national symbols. His own awakened imagination enabled Malczewski to free the creative voice within and give rise to new aesthetic ideas defining Poland's school of Symbolism.

Over the course of some 30 years between 1885 and 1916, Malczewski regularly visited Paris, Munich and Vienna. He made several trips to Italy, Greece and Turkey. He also took part in the archaeological expedition organized by his friend Karol Lanckoroński, documenting their scientific findings with his detailed studies. He drew his inspiration from a wide variety of sources often exotic or even biblical, but inadvertently, translated them back into Polish folklore, tradition and motives in his own painting. His most famous canvasses include "Błędne koło" (The Mad Circle, 1895–97), "Melancholia" (1890–1894), "Natchnienie malarza" (Painter's Muse, 1897), "Wizja" (A vision, 1912), the series of Thanatos as well as Bajki (Fairytales), and several notable others. Many of his paintings prominently feature his own self-portraits in elaborate costume; a trade-mark of his style often displaying of a great sense of humor.